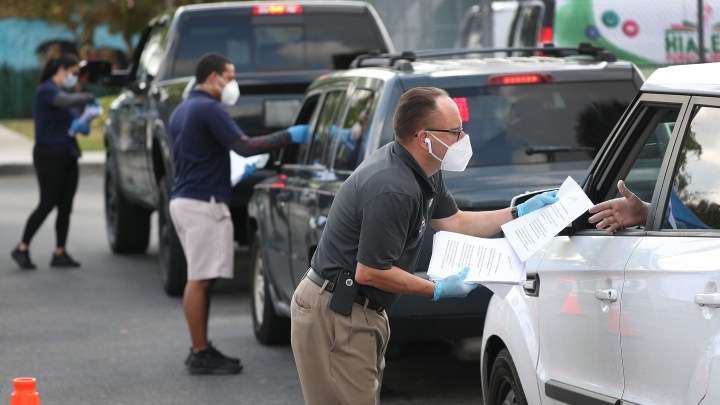 COPY
The job guarantee concept is simple: For everyone who wants a job, a job will be provided by the government. Joe Raedle/Getty Images
Reimagining the Economy

The job guarantee concept is simple: For everyone who wants a job, a job will be provided by the government. Joe Raedle/Getty Images
Listen Now

Over 44 million jobless claims have been filed in the last 12 weeks, and some of those jobs are gone forever. The call for big ideas in job creation, like President Franklin Delano Roosevelt’s New Deal, are growing louder. One such idea, the job guarantee, was once seen as fringe but is gaining acceptance. The concept is simple: For everyone who wants a job, a job will be provided by the government.

Pavlina Tcherneva, an associate professor of economics at Bard College and author of the forthcoming book “The Case for a Job Guarantee,” says a job guarantee could be the key to the recovery of the post-COVID-19 economy.

David Brancaccio: We all know about the coronavirus and the pandemic, but you say, actually, unemployment propagates like a disease?

Pavlina Tcherneva: You notice that when people lose their jobs, they obviously curb their own expenditures. And then that unintentionally reduces revenue for other firms, and other firms have to respond by cutting their own payrolls. And so if you were to look at unemployment just spatially, geographically, you see a wave of unemployment that ripples through communities. But it also has the other impacts on people and families and communities. We know that people are sicker, weaker, they make more trips to the doctors, they take more medication and mortality rates increase as a result of unemployment. And so this is also a public health issue.

Brancaccio: So not just a metaphor here, but it is actually deadly in many cases. You have a cure for this particular epidemic. It’s about the government hiring a lot of people, not just in the next couple of months, but as a matter of policy.

Tcherneva: Much like FDR did it during the New Deal, but more aggressively and quicker because we already have had the experience. Now, instead of doing direct employment programs as crisis resolution policies, we can put in place a policy framework, one that will be a permanent tool in the toolkit of policymakers, even when the economy is doing well. If there are folks looking for work, the public sector can provide public service employment opportunities that are good and well paid for those who need them.

Brancaccio: Can we afford it? A massive, ongoing program to keep people employed on the taxpayer tab? I know interest rates are low, but it will have a cost.

Tcherneva: Well, the cost is real. The cost is not doing anything and allowing mass unemployment and all of the associated social and economic costs. We just passed a $2.2 trillion CARES Act budget. That is large and unprecedented by any standard. So we can certainly pass a budget to create, for example, a job guarantee that would employ of 20 million people to the tune of $500 billion to $600 billion.

Brancaccio: And the private sector could learn to pay more? Because it would be competing for workers, and we start to see a bit of it when we’re at, quote-unquote, full employment.

Tcherneva: The private sector either hires from a pool of unemployed or hires from a pool of employed. Private firms don’t like to hire the unemployed. They prefer to poach from competitors. They prefer people who have work, who have smaller gaps in their resumes. So the [job guarantee] will provide that on-the-job training education and experience. Now, if the argument is that we should have permanent unemployment so that private firms should have the right to pay below living wages or maybe even poverty wages, and use the threat of unemployment to create working conditions that are not desirable, then maybe that’s the world we need to leave behind.