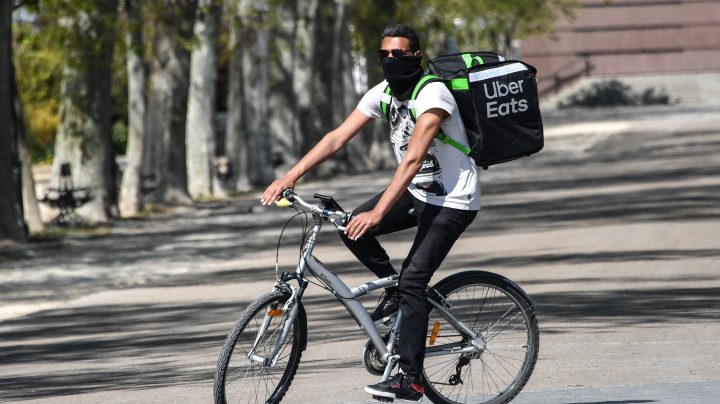 COPY
An Uber Eats delivery person in April. Some delivery companies say a decrease in fees they charge restaurants would be passed on to consumers. Pascal Guyot/AFP via Getty Images
COVID-19

An Uber Eats delivery person in April. Some delivery companies say a decrease in fees they charge restaurants would be passed on to consumers. Pascal Guyot/AFP via Getty Images
Listen Now

Los Angeles is the latest in a slew of cities to consider putting a cap on the fees third-party delivery apps, like Postmates and Uber Eats, charge restaurants. Restaurants pay fees as high as 30% of an order, which has become a sticking point for these hard-hit businesses. As San Francisco, New York, and Washington, D.C., have already done, Los Angeles is proposing to cap those restaurant fees at 15%.

But the Los Angeles Times reports dozens of local restaurants are not on board with the idea. They signed a petition opposing the proposed ordinance out of concern it could do more harm than good.

“You know, you hate to pay the cost, but once you’re starting to see the results, it’s kind of hard to stop,” he said.

In the pandemic, the services have become a lifeline for restaurants, so it’s understandable some would worry about rocking the boat.

And R.J. Hottovy, a consumer strategist for Morningstar, says most delivery apps, like a lot of tech companies, are still struggling to reach profitability.

“You have to build a base before you can start to collectively monetize that,” he said. “I think that’s kind of the struggle that a lot of the third-party delivery apps are going through at this point.”

Some delivery companies have argued any decrease in fees they’re allowed to charge to restaurants would instead be passed on to consumers, who might turn away from ordering.

But according to Amanda Topper, with market research firm Mintel, 40% of respondents in a recent survey thought diners should pay the extra fees, and nearly two-thirds agree the fees for restaurants are too high.

“There is some sort of agreement there that consumers are willing to kind of foot the bill here,” Topper said.

The delivery companies have also suggested cuts to fees could be passed on to drivers. But that could make it hard to attract enough of them, said Rebecca Givan, an associate professor of management and labor relations at Rutgers.

Deliveries have already become more time consuming because of social distancing rules, so she says drivers, who are independent gig workers without benefits or a minimum wage, are already often effectively making less.

“It’s going to be hard to squeeze the drivers more than they’re already being squeezed,” she said. “Many of them are already barely covering their expenses.”

Some restaurants fear the apps might pull out entirely from cities that vote to cap fees. But with more and more places going in that direction, Grubhub, Postmates and others might have little choice but to accept lower fees if they want a bite of the biggest markets.