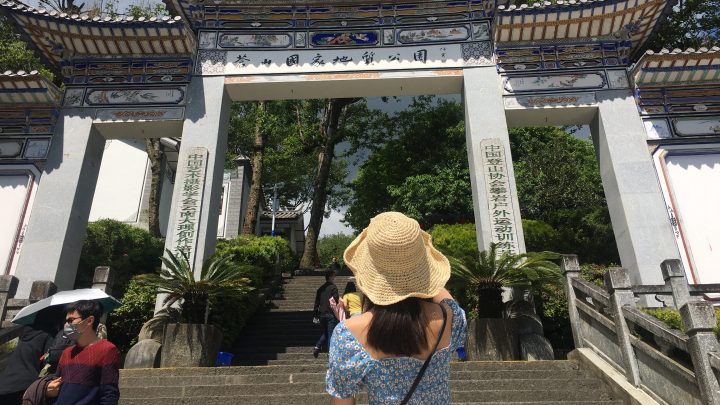 It might be tough to imagine traveling again, but it is happening slowly in China.

The Chinese national health commission has been reporting, on average, a handful of COVID-19 infections and over a dozen asymptomatic cases a day for the last two weeks.

The country’s borders remain shut to foreigners even if they have a valid work visa, but in theory people can travel freely within the country.

During the recent labor holiday, tourism revenue dropped by 60% to 47.6 billion yuan ($6.7 billion) from May 1 to May 5 compared to last year. The number of trips made during the same period dropped 41% to 115 million.

However, without a vaccine, there are still many measures in place to help stop the spread of the coronavirus.

I recently got a taste of those measures on my vacation in the lush greenery of southwestern China’s Yunnan province, 1,600 miles from Shanghai.

Here are my tips for traveling in a COVID-19 world.

What is usually a 3.5-hour direct flight from Shanghai to my destination city of Dali took more than 12 hours. Flights in and out of the Dali airport have been cut by more than half.

The fastest route I found was to fly from Shanghai to the provincial capital of Kunming, hop on a high-speed train to Dali, then take a Didi (the Uber or Lyft of China) to the ancient village of Shuanglang.

Coronavirus travel tip #2: Do not expect much social distancing

There was not one empty seat on my flight from Shanghai to Kunming.

Even when space was not confined, like during my visit to the Mount Cangshan UNESCO geopark, tourists stood shoulder-to-shoulder despite the stickers and signs reminding them to stand about 5 feet apart.

Security guards and park staff did not bother to enforce social distancing either.

Instead, they hollered at tourists to fill out health declarations, which then assigns people a colored QR code: green means healthy, yellow indicates the person might need to be quarantined and red means a suspected or confirmed coronavirus carrier.

I cannot travel without a green QR health code.

The Shanghai government has assigned me one, but it is not valid in Yunnan province.

Prior to my booking a hotel, the staff sent me a QR code to scan using either Alipay or WeChat, which already hold enormous amounts of my information.

Then I enter details I usually fill out when I arrive from a foreign country: name, date of entry into China, hotel address, passport and cell numbers.

Once I receive a green QR code, the hotel accepts my booking.

A green health QR code can also allow me to exit the airport in Kunming and get past security at the train station to buy tickets, but it is not enough to get me into the platform area.

Since the Chinese state-run media has focused on recent infections being imported, local authorities have done extra checks on foreigners, even though a lot of the cases are Chinese nationals returning from abroad.

At one point, three men in hazmat suits from the police, health bureau and railway authority hover over my passport to take photos.

One by one, they pepper me with the same questions: “Which country are you from? What is your cell number? When did you last enter China?”

Then they send all that information plus the snaps of my passport on WeChat.

I have no idea who they sent my information to, but the app has zero end-to-end encryption.

Another three rail station staff people write down my name and cellphone and passport numbers in their booklets.

With two hours to fill before my train ride from Kunming to Dali, I go for a foot massage.

However, I am nearly denied service because I ran 100 yards from the rail station to the spa.

My temperature measures 100 degrees Fahrenheit, which the authorities say indicates a fever — a symptom of the coronavirus.

“Sit and wait,” one staff member tells me.

Five minutes later, he points the digital thermometer at my forehead and then at my wrist until my temperature falls within the normal range.

There is enormous pressure on businesses to screen coronavirus carriers.

“The limit is 99.1 F, but to be on the safe side, we usually don’t even accept people measuring 99 F,” my masseuse says.

Luckily, the spa was desperate for my business.

Coronavirus travel tip #5: Policies and enforcement will not be consistent

At the entrance of the ancient Shuanglang village, a security guard points to a different QR code from the one at the airport.

“This is to check in with the local government,” the guard says.

I input my phone number, which is attached to my passport.

Just then, another group of tourists arrives, and they say they have scanned the QR code.

The security guard waves them in without checking.

Policies for businesses are confusing.

Officials said they want people to travel and spend. However, the usual crowds in Shuanglang have not returned.

It was the same scene at another place where I stayed across the lake in Xizhou, where Chicago native Brian Linden and his wife, Jeanee, of San Francisco restored a heritage site. It’s now a boutique hotel called the Linden Centre.

The hotel’s terrace overlooks a 2-mile stretch of field sitting between Lake Er to the east and the tail end of the Himalayas to the west.

Usually the Linden Centre has 90% occupancy this time of year. But now, after it was shut down due to the pandemic and then reopened, only a third of the rooms are occupied, Linden said. That’s partly because foreigners make up half of his clientele, and many are not allowed into the country at the moment.

At the same time, some school districts in China actively discourage students from traveling or they risk self-quarantine upon their return.

There is fear of a second wave of infections.

“I’m willing to accept the capriciousness of some of the policies, mainly because I believe they’re not being made for … somebody’s pocket,” Linden said.

“I think they’re being made for the best interests of the country.”

Plus, if someone in the tourist area catches the coronavirus, Linden’s business might have to close again.

“Business is tough, but our partner is the [local] government,” Linden said.

Officials have urged businesses to keep their staff. Linden said he has given his employees, most of them from the local area, their basic salary and sometimes a stipend.

“It’s more or less a furlough,” he said. “The government is going to subsidize [us] and ensure that we survive.”

Linden hopes his hotel will be profitable again and back up to 90% occupancy as early as October during a national holiday.

Travel can affect work, even when traveling to areas like Yunnan province deemed as low-risk by the Chinese government.

I was disqualified from covering a government press tour of a school reopening in Shanghai because I had not been in the city for the previous 14 days.

It makes me think three times as hard before choosing a vacation spot. Linden anticipates the coronavirus will make more people aware of their carbon footprint and reprioritize what they want from traveling.

“I hope that travel will not be solely going to a luxury retreat and just sitting on a beach when you could have done that probably 100 miles away from home somewhere, because once you close your eyes and you sit on a beach, you could be almost anywhere,” he said.

“I would hope that [the] main reason for traveling is being exposed to different ideas that will challenge your own views of the world.”

That kind of shift might give Linden’s hotel an advantage because his business is immersed in China’s countryside, where a good chunk of the population still lives.

“We have always positioned ourselves as an educational” travel experience, Linden said.

He has seen a shift in his clientele already. While his overseas clients are cut off from China, his hotel has received more inquiries from foreigners living in the Chinese megacities of Beijing, Shanghai, Guangzhou and Shenzhen who might not be able to go back home this year because of the pandemic.

During a four-day trip, I underwent:

There is extra scrutiny of foreign passport holders like me. But even Chinese nationals still need to scan just as many QR codes and undergo the same fever checks.

A lot of the additional coronavirus checks can be frustrating and appear strict on the surface.

However, once I checked in to my hotel and had my passport registered into the local police system, which has been standard for foreigners since long before the pandemic, the rest of the trip was more relaxed.

Since the number of infections has been low in the area, most locals do not wear face masks like they do in Shanghai, and I could safely put my health QR code away for the most part — at least until I headed back to Shanghai.