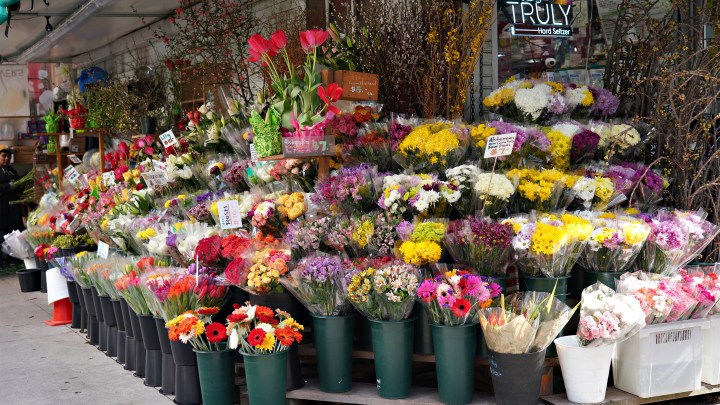 COPY
A New York bodega with a bright display of flowers for sale. Flower farmers have lost much of their markets during the lockdown. Cindy Ord/Getty Images
COVID-19

A New York bodega with a bright display of flowers for sale. Flower farmers have lost much of their markets during the lockdown. Cindy Ord/Getty Images
Listen Now

America’s cut-flower farmers, who grow the stuff bouquets are made of, have seen their business plummet during the COVID-19 pandemic. Grocery stores are making more room for essentials, consumers are cutting back on luxury purchases, florists are shuttered and weddings and other events are canceled.

The result has been an unprecedented crisis for a $1.4 billion U.S. industry already suffering from competition from cheaper imports, forcing American flower growers — 75% of whom are clustered in California — to get creative to survive.

The height of the flower-buying season is between Valentine’s Day and Mother’s Day, which this year has been blunted by the novel coronavirus and ensuing social distancing measures to slow its spread.

Farmers had been planting for a banner year, timing crops to mature just as demand increased. With nowhere to deliver most of their crops, farmers are instead giving away flowers and using the rest as compost.

“There are flowers being dumped on a regular basis,” said Dave Pruitt, CEO of the California Cut Flower Commission, a state agency.

Anecdotally, farmers say at least one major California grower has already gone out of business. Pruitt, who has been involved in the flower-growing industry since 1969, predicted that if demand did not return to 80% of what it normally is relatively soon, many more farms would close.

“I have never seen anything like this before,” he said.

Neither has Rene VanWingerden, who has grown flowers for 48 years in Carpinteria, California — a small coastal town north of Los Angeles. His large farm produces 100,000 stems a day. Normally, a quarter would go to wholesalers and the rest to supermarkets.

“The government said, ‘OK, everybody stays home,’ [and] we basically lost 95% of all our market,” VanWingerden said. “We were doing quite well in January, February, and we were looking forward to a very good year.”

VanWingerden said he laid off 50 workers and dipped into his retirement savings to pay the salaries of 170 others. He thinks he has enough funds for four pay cycles.

In the last two months, farmers have discovered new vulnerabilities in their businesses and are working to shore them up. For example, with wholesalers and grocery stores canceling orders, the few orders farmers did have were not enough to fill large trucks, so their traditional transportation lines were unavailable to them.

Ironically, relatively smaller farms outside of California are faring better, as they are less tied to traditional supply chains feeding wholesalers and grocery markets.

There are weekly online meetings among farmers from around the country to share ideas, find new workarounds and new direct-selling opportunities — such as opening up farms to visitors who are eager to find safe outdoor activities and selling bouquets directly to them.

“So sharing what other people are doing, we’re able to replicate that,” said Rita Jo Shoultz, who owns a peony farm in Homer, Alaska.

Shoultz, whose payroll is much smaller at 17 people, including herself, direct ships her flowers via FedEx, eschewing traditional supply chains and serving high-end customers outside Alaska. During the shutdown, she is working to expand into e-commerce, with a website that will allow her to further develop one-on-one relationships with buyers.

Frank Arnosky’s farm in Blanco, Texas, is also avoiding the fate of large California growers by taking control of its own shipping needs. Arnosky employs 10 workers on a 20-acre farm that is geographically well-situated to directly serve as many as 50 grocery stores in the central Texas area.

“We’re lucky because we have a local delivery system that we can do ourselves, so we don’t have to count on truck lines,” he said. “So we’re going to use our small trucks,  and get on the road, and head up to Dallas and make Mother’s Day deliveries to the stores there.”

VanWingerden is working to adopt some new ideas to save his California farm. Principally, he will develop a direct-selling operation to connect with florists and event planners first, and then eventually expand to consumers with a flower-purchase subscription plan.

In the meantime, David Sumner, who directs the University of California Agricultural Issues Center in Davis, said he is worried about farmworkers. The rank and file who are getting laid off as farms struggle are the “most vulnerable,” he said.

“Those people are really in terrible shape. Many of them are immigrants, and some of them are undocumented,” he added. “Which means public assistance may not be available for them.” 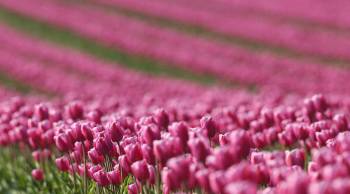