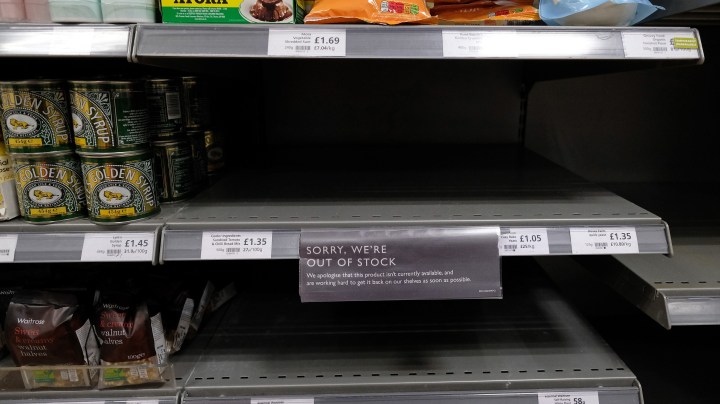 COPY
Empty shelves where packets of flour would normally be stocked are pictured below half-empty egg and sugar stocks in a north London supermarket. Isabel Infantes/AFP via Getty Images
COVID-19

Empty shelves where packets of flour would normally be stocked are pictured below half-empty egg and sugar stocks in a north London supermarket. Isabel Infantes/AFP via Getty Images
Listen Now

The COVID-19 pandemic has completely upended our personal supply chains. Some companies are adapting to fill a need with some shelves in stores looking bare.

Major chains offered online order and delivery, but you had to wait as much as three or four weeks just to get a delivery slot.

“It really started from a few WhatsApps,” said Nick Fowler, co-founder of the company, which provides fruit and vegetables to 300 corporate customers, including Michelin-starred restaurants and five-star hotels.

When COVID-19 caused restaurants and hotels to close their doors, Smith & Brock was suddenly flooded with excess supply.

“We had a fall of 95% literally overnight,” Fowler said.

So, he and the team accelerated plans to launch a door-to-door delivery service.

“One of our sales guys messaged a few people on his street and said, ‘If anyone wants a veg box, let me know,'” Fowler said. “And that just grew arms and legs. The phones went wild.”

Smith & Brock is now delivering boxes costing between $25 and $70 each. It’s not quite the revenue generator his corporate buyers would bring in, but it’s allowing Fowler’s team to hire more staff and serve the community.

“A week ago, we were staring down the barrel of, ‘How do we get out of here? Will we survive?'” he said. “I never envisaged seven days ago we’d be talking about turning the website off because it’s getting to the point where I’m not sure we’ll be able to handle it in a few day’s time.”

Not only are supermarkets unable to keep stock of big-name flour brands, small millers like Wessex have also seen a surge in demand as more people take up baking under lockdown.

“Yesterday, we took 80 orders in eight minutes,” Munsey said. “We’re sending out around eight tonnes of flour a week. We used to only send out one.”

But Munsey isn’t worried about running out of supplies.

“We buy a lot of our local wheat from local farmers within 30 miles,” she said.

The big question is whether consumers will continue purchasing this way once the coronavirus crisis is over. In the meantime, companies will keep taking orders so our personal supply chains — and the sourdough starters we created to fill our downtime — don’t dry up.