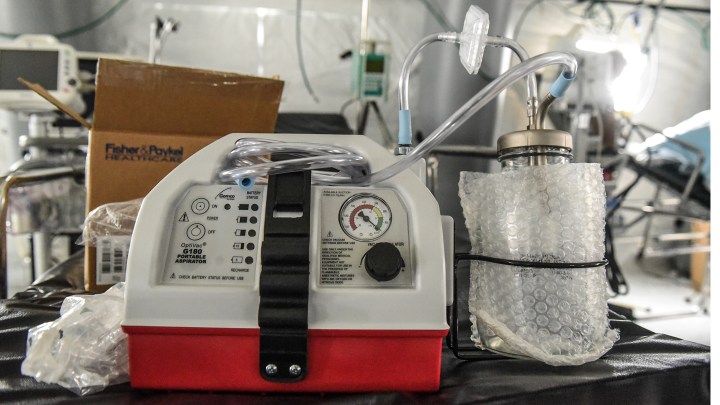 COPY
A ventilator and other hospital equipment is seen in an emergency field hospital to aid in the COVID-19 pandemic in Central Park on March 30. Stephanie Keith/Getty Images
COVID-19

A ventilator and other hospital equipment is seen in an emergency field hospital to aid in the COVID-19 pandemic in Central Park on March 30. Stephanie Keith/Getty Images
Listen Now

Pretty much every day, New York Governor Andrew Cuomo says the same thing in his press briefings. The states all need ventilators and there aren’t enough, so they’ve been competing.

“You now literally will have a company call you up and say, ‘Well, California just outbid you.’ Cuomo said at a press conference Tuesday. “It’s like being on eBay, with 50 other states bidding on a ventilator.”

“California rebids. That’s literally what we’re doing.” he said. “I mean, how inefficient.”

As the number of COVID-19 cases rises, states are bracing for overwhelmed hospitals where there isn’t a ventilator for everyone who needs one. That’s what’s behind this bidding war, which is driving ventilator prices sky high.

It’s common for states bid against each other for things like police cars and fire trucks and corporations.

“States competed over attracting Amazon and they compete over attracting other sorts of businesses all the time,” said Ben Brunjes, who teaches public policy at the University of Washington.

But in an emergency situation, things are different. We’re not talking about corporate tax incentives. These are ventilators that states and hospitals desperately need. It’s life and death. And there’s no choice — each state has to keep paying whatever it takes. They’re on their own.

This is one of those war-like situations where you wouldn’t want to have 50 states bidding for defense supplies, said Bill Glasgall, head of state and local initiatives at the Volcker Alliance. “It would just make no sense when it’s a national problem.”

The Trump administration could centralize things and put a stop to the bidding war, Brunjes suggested.

“The federal government could easily step in and and say,: ‘Governors, stop bidding. We’re going to buy these things and give them to you,'” he said.

For now, states have mostly had to fend for themselves. FEMA recently got involved, but it’s essentially just joined the bidding war for ventilators — in some cases, bidding against states like New York and Massachusetts and winning.