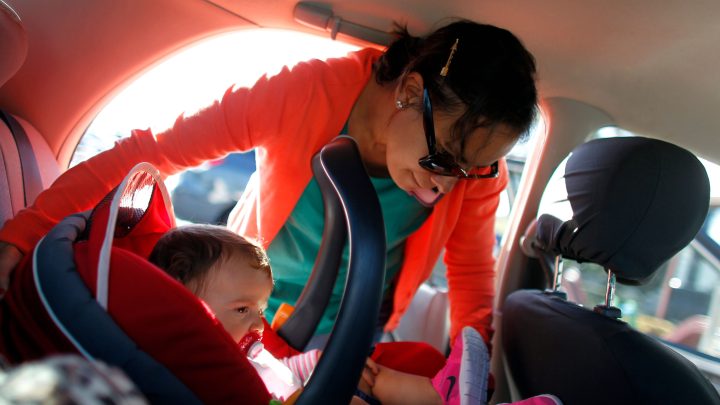 The following is an adaptation from Adam Minter’s, “Secondhand: Travels in the New Global Garage Sale.” In it, he tracks multi-billion dollar international business of secondhand goods.

The manufacturers of child car seats aren’t shy about promoting the idea that older seats are a hazard that should be kept from the secondhand markets. Graco, one of the world’s largest manufacturers of child safety seats, explains on its website that “used or expired car seats can be dangerous, especially if you don’t know the car seat’s history.” So Graco’s website recommends the following:

To help ensure a car seat won’t be used after expiration, it is a good idea to remove the cover, cut or remove the harness straps, write on it with a sharpie, and place it into a black garbage bag before taking it to be recycled or disposed of.

The practical effect of advice like this is to terrify parents into destroying used, unexpired car seats for fear that they’ll become tools of death in the hands of less-thoughtful parents. Retailers, keen to sell more car seats, perpetuate the message.

Despite the warnings, markets for secondhand child safety seats thrive in developing countries around the world, from Malaysia (where I live) to Mexico, where parents shy away from buying new seats due to the oftentimes high prices. And that made me wonder: Is it actually safe to use a used car seat? Or are parents in developing countries putting their children at risk by choosing to use a secondhand car seat? Would they be better off not using a seat at all?

I contacted the United States Highway Transportation Safety Administration, the U.S. government agency that regulates child safety seats, to obtain a list of rules and regulations relating to expiration dates on child safety seats. A spokesperson wrote back: “There are no actual rules or regulations in the U.S. about using an expired date car seat.”

The U.S. government isn’t oblivious to the possibility that a child safety seat could degrade over time. It has detailed protocols for testing whether the seatbelts included with child safety seats are able to withstand long-term exposure to sunlight, abrasion, and microorganisms. If the seatbelts don’t pass, they aren’t installed. Period. There are no expirations. But the belts are the only parts of a child safety seat that must be tested for durability, according to the regulations.

So what, then, accounts for the expiration dates?

I sent a four-question questionnaire to ten of the world’s biggest child safety seat manufacturers. I asked the process by which they determine the safe lifespan of a safety seat, whether materials manufacturers (such as the companies responsible for the plastics) are consulted, whether the manufacturers rely on any data or studies to determine expiration dates, and when expirations were first attached to seats.

Only two companies responded. Graco emailed to recommend that a car seat be replaced after the “useful life date” and sent me a link to public information on its website about car seat expirations. Britax wrote with information that answered questions I didn’t ask, or didn’t answer at all. For example, here’s the third question from my questionnaire:

Has Britax conducted any studies on aged car seats that have influenced the determination of lifespan? Could it share those studies?

Enter the Minneapolis-based Target, a major vendor of child safety seats. Since 2016, it’s run a campaign in which consumers are given store credit for recycling their used and expired seats at Target stores (Target then has the seats destroyed). In part, Target frames the trade-ins as an initiative to protect children. And since the program started, Target claims it’s recycled more than 500,000 used seats.

As recently as October 2018, Target’s trade-in website claimed, “Used car seats shouldn’t be sold or given away, since they expire every six years and regulations change constantly.” When I reached out to Target to ask if the company could provide a source for that claim, a company spokeswoman replied by referring me to a car-seat-industry-sponsored website: Car-Safety.org.

Within hours of my email, Target changed the language on its website to read: “According to car-safety.org, car seats expire every six years . . .”

I figured that Car-Safety.org would have links to studies showing, for example, increased risk between a used car seat and a new one. But I was wrong! Target’s new language was nowhere to be found on the Car-Safety.org site. So I wrote back to Target and told the company. Hours later, its website language changed again, this time to read: “According to car-safety.org, many manufacturers recommend that car seats expire around the six-year mark.”

That’s a grammatically suspect way of accurately conveying what the site actually says: “Six (6) years is the general recommendation.” But anyone trying to locate data supporting that recommendation will be disappointed. Car-Safety.org — like the manufacturers who support it — just makes unsubstantiated claims.

Is Target purposely conveying false and unverifiable information to parents? I’m fairly certain the reason Target is so cavalier with its language surrounding car seats is that the company — like many parents — simply assumes data exists to substantiate the expirations.

But I believe in giving the benefit of the doubt. So I went back to Target to ask if it could offer another source for its claims about the dangers of used and expired car seats. The Target spokeswoman suggested that I read a Consumer Reports article. I did, but that didn’t answer my questions either. So I reached out to Consumer Reports to see if they had any data substantiating car seat expirations. They never responded.

And then I happened upon Sweden.

Sweden has some of the best and strictest child safety seat laws in the world. And they’ve paid off: child auto fatalities have been reduced to almost zero.

I figured that if anybody could give me an honest, data-driven answer to the question of whether used and expired child safety seats are dangerous, it would be a Swedish regulator. So I contacted Maria Krafft, the director of traffic safety and sustainability at the Swedish Transport Administration, who years ago had blogged in favor of used car seats and where to buy good ones in Stockholm. Krafft referred me to Professor Anders Kullgren of the Karolinska Institutet and the Chalmers University of Technology, as well as the longtime head of traffic safety research at Folksam, one of Sweden’s largest insurers. During the early 1990s, Folksam even manufactured its own line of child safety seats. If used car seats are a hazard, Professor Kullgren would know. He shared his thoughts via email:

We have the same experience in Sweden. Manufacturers of child restraints (and other safety equipment such as bicycle and motorcycle helmets) tell their customers to buy a new product after a certain period of time, often relatively short. We can’t see any evidence to justify that from what we have seen in real-world crashes.

The email continued, touching on Folksam’s past as a seat manufacturer:

We still have some seats stored at Folksam that have been used. We have not seen any changes or problems with the plastic material in those seats for this 20–30 year period of time.

That’s not data, but it’s more than what the world’s biggest car seat manufacturers and Target are willing or able to reveal.

Professor Kullgren concluded by writing that Folksam’s recommendation is that so long as a seat hasn’t been in a crash or otherwise doesn’t exhibit any damage, it’s fine to use. He also noted that seat designs are always improving, so a consumer buying a newer seat is likely getting a safer seat. But there’s nothing illegal or unsafe in using an older one.

It’s good advice, but it saddened me. Instead of destroying 500,000 used seats over the years, Target could have safely marketed them to emerging markets. They would’ve sold, and many children would be safer because their parents had access to a secondhand market.