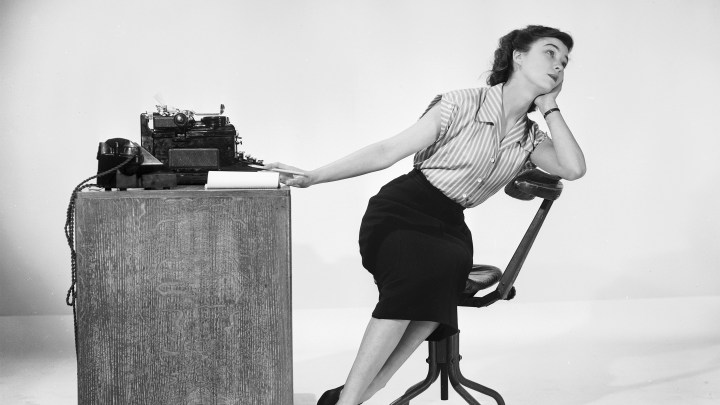 COPY
One economist said we're stuck in the slow lane when it comes to productivity. Chaloner Woods/Getty Images
Workplace Culture

One economist said we're stuck in the slow lane when it comes to productivity. Chaloner Woods/Getty Images
Listen Now

American workers are becoming less productive according to the latest data from the U.S. Bureau of Labor Statistics. Productivity basically measures how many widgets are produced per hour worked in our economy, and that number declined slightly in the third quarter for the first time in almost four years.

Workers did produce more last quarter, but they spent even more time doing it, sending productivity down by 0.3%. While this statistic tends to bounce around a lot — it was much higher earlier in the year — overall productivity since the Great Recession hasn’t been all that great said Ryan Sweet, an economist with Moody’s Analytics.

“We’re still stuck in the slow lane,” he said. “It doesn’t bode well for the economy’s potential growth rate.”

Productivity gains are important because they can drive business expansion, higher wages and standards of living, according to Dean Baker, senior economist with the Center for Economic and Policy Research. “It’s a huge, huge deal but I don’t think we have a really good story about why we’ve had this slowdown or what might change it,” he said.

One theory is that productivity has become much harder to measure as our economy has transitioned away from manufacturing physical goods and more towards delivering services. But Baker said that doesn’t account for the scope of the problem. And neither do our obsessions with social media or distractions like politics.

“People work really hard,” he said. “The big differences in productivity growth have much more to do with the equipment that workers are working with and also workplace organization.”

Despite all the talk of artificial intelligence and automation, Baker said businesses haven’t been investing as much as expected in new technology or research and development. Business investment has slowed after a temporary tax cut-fueled surge.

But things could be about to change, according to Mekala Krishnan, a senior fellow with the Mckinsey Global Institute.

“We see technology everywhere around us but companies are still trying to figure out how to make the most of these new technologies,” she said, noting something like this happened with personal computers in the 1980s. Her research shows it can sometimes take more than two decades for new technology to be adopted widely enough to make a difference.