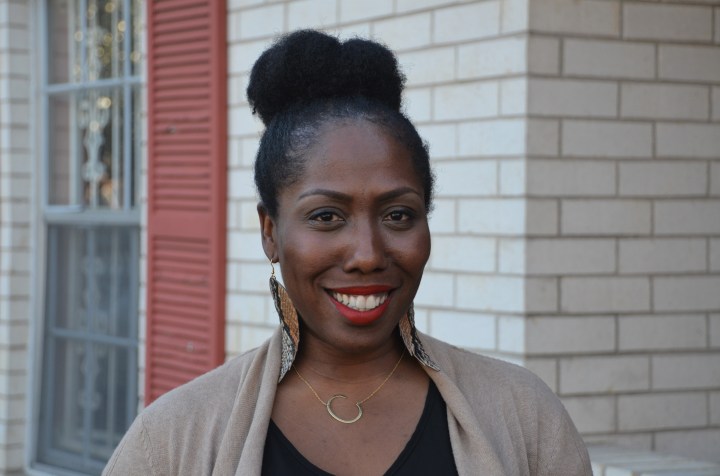 COPY
Chrishelle Palay in front of her house. Amy Scott/Marketplace
Adventures in Housing

Chrishelle Palay stood outside her house, waiting for her kids to get home from school. A few neighbors played dominoes on the front porch next door. A lawn mower buzzed nearby.

“It’s actually a pretty quiet neighborhood, aside from the railroad track down here, and the roosters in my backyard,” she said.

Palay, 44, never expected to be living in Kashmere Gardens, a historically black neighborhood in Houston that’s still struggling with the legacy of segregation and neglect. Then her great aunt, Joyce Johnson, died and left the house to the family. Even Johnson had expected them to sell the place.

“She used to always tell us and my mom, ‘No one’s going to want to live in this neighborhood,’” Palay recalled. “‘Look at the dumping. Sometimes the trash isn’t picked up on time. Who wants to live out here?’”

Palay did. And to understand why, it helps to know her history. Back in 2008, she and her future husband, Leseh Palay, were all set to buy a house. Then the financial crisis hit. She lost her job as an architect in May of that year. His company folded in July. “We got married in August, both of us unemployed,” she said. “That was not part of the plan.”

So instead of buying a house, they rented an apartment in Cypress, Texas, a Houston suburb. Chrishelle eventually got a job as a housing advocate for low-income Texans. Leseh got his real estate license. But when they tried to upgrade to renting a house, “application after application, we were denied,” she said. “Our credit was fine. We were both gainfully employed and had no idea as to why. We just thought, ‘well, maybe it’s a really, really hot market.’”

But then, the couple across the hall asked Leseh to help them find a house to rent. “It happened to be a white couple,” Chrishelle Palay said. “The very first house they put an application in for, they got the house.”

At first, Palay thought her neighbors had been lucky. But a few months later she came across a study in which equally qualified African American and white “mystery shoppers” posed as prospective renters in New Orleans. In almost half the cases, the black renters were turned down or treated less favorably.

“My mouth just dropped,” Palay said. “In 2015, with two educated folks that happen to be black, this is still what we’re dealing with.”

The Palays stayed in their apartment building, eventually moving to a larger unit. Then, in August 2017, came Hurricane Harvey. Most of the homes in Kashmere Gardens flooded, including her aunt’s. At the time Johnson had been too sick to realize the extent of the damage.

A few months after the storm, Johnson died, and the family had to decide what to do with the house. After all she’d been through, Palay realized her aunt’s warnings about the neighborhood were a reason to stay.

As a housing advocate she’d watched historically-black neighborhoods “just crumbling,” she said, with people losing their homes to foreclosure and unpaid taxes. “We’re seeing the little bit of wealth that communities of color have just whittling away,” she said. “So it was important to me, and to our family, that we were able to hold onto that.”

The family moved in about a year ago and set about making the house their own. It was an older home, and kind of funky. Johnson had been a caterer, so there were two kitchens but only one full bathroom. Her taste would have pleased Liberace. They ditched the mermaid coffee table, but held on to the opulent chandelier and tufted red velvet bench. Palay converted the formal dining room into a “Ladies’ Room,” where the women of the extended family gather for conversation and laughs.

“This was a home where there was always entertaining,” she said. “We’ll be doing things for all the upcoming holidays just like Aunt Joyce would. So, to continue that legacy is so important to us.”

She’s put her advocacy skills to work, calling to complain when the trash isn’t picked up or a new pile of junk shows up in a drainage ditch. But she’s also fighting a bigger fight. She’s now director of the HOME Coalition, working to make sure communities like hers aren’t left behind as Houston recovers from Harvey.

“It comes with challenges,” Palay said of her new neighborhood. “But then for the sake of just holding on to family property and being able to continue to let it live on, it was worth it.”