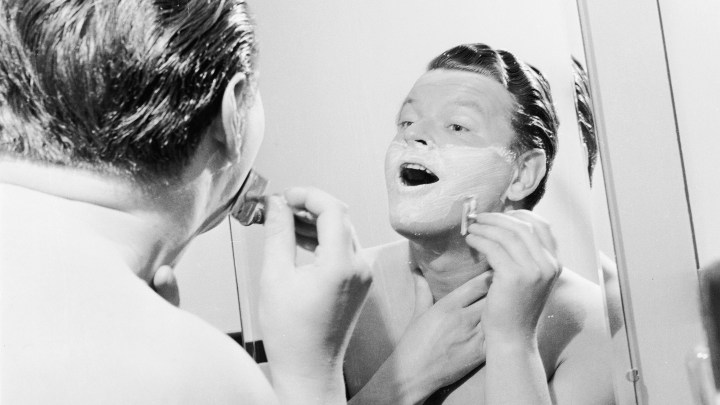 A couple years ago, the subscription razor company Harry’s made this promotional video.

It said razors were overpriced and poorly designed and that its founders, Jeff Raider and Andy Katz-Mayfield, were trying to fix that by making better razors and delivering them right to your door.

They were taking on Big Razor.

“One big razor company has relentlessly increased prices for decades making insane profits at the expense of customers,” the ad said, referring to Gillette, the leader in the razor market. Gillette has since cut prices to compete.

Jake Adair, who works in finance in North Carolina, is one of Harry’s more than 12 million customers. He responded to a callout we did on Twitter. And he said he really likes Harry’s razors — that they’re sleek.

“They’re going for more like an Apple iPhone type of razor then just, like, here’s a piece of metal with some blades on it to cut your face with,” Adair said.

But he also loves the whole sales pitch — the company’s story.

“You know, it feels like a younger company,” Adair said. “And I think personally, being only 24 and being young, I’m just more interested in associating myself with companies that I relate to.”

But Adair said he’s starting to get a little skeptical about Harry’s because he just heard the news that Edgewell, the parent company of Schick razors, recently bought it for nearly $1.4 billion.

He’s not sure he’s going to stick with the brand.

“It just makes it seem, like, a little bit more fake,” he said.

Big consumer products companies love to buy up smaller niche brands. It allows them to reach new, often younger, customers, and it can also buy them access to those customers’ data.

When these deals happened, some customers weren’t happy.

“I mean a lot of the charm of those smaller brands is it’s not your dad’s brand, right? It’s not J.C. Penney, it’s not what your mom would buy,” said Rita McGrath, a strategy professor at Columbia Business School. “And it’s very hard when they’re bought by a big, staid company to maintain that brand purity.”

Customers worry that the quality of the products will drop or that the brand will abandon its roots.

Ali Dibadj, a senior analyst at Bernstein, said that is a risk, because these big companies often want to impose their way of doing things.

One example: In 2000, Kellogg’s bought Kashi, a brand known for its all-natural whole-grain cereals. At first, Kellogg’s left Kashi alone. But then it started changing ingredients and selling the brand at bulk retailers like Costco. It even dropped the phrase “all-natural” from some of Kashi’s products after a class-action lawsuit over false advertisement. Over time, Kashi’s sales fell.

Dibadj said it’s better when the big company says to its acquisition, the Kashi or Harry’s or Burt’s Bees, “We’re gonna let you do your thing.”

“Keep doing what you’re doing on the front end of things. We’ll handle a lot of the back end, complex, purchasing and, you know, unsexy things, but keep your brand alone, ” he said.

Edgewell is going a step further. It’s letting the founders of Harry’s — Raider and Katz-Mayfield — run its entire U.S. operation. The founders, by the way, said they didn’t have time to talk this week.