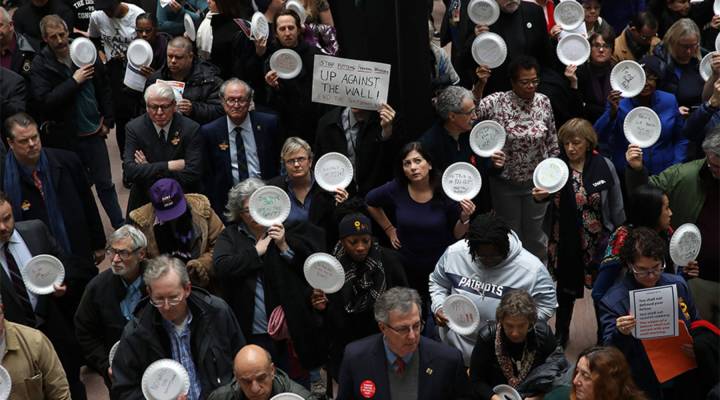 Every month, 33-year-old Robert Literman logs onto a government website and withdraws his $4,500 in monthly pay. He has a National Science Foundation grant that covers his work as an evolutionary biologist at the University of Rhode Island, so he basically cuts his own monthly paycheck. He wasn’t expecting the partial government shut down.

“I would have pulled down more [money] had I known,” he said.

During the shutdown, the website where he gets his money was also shut down. Literman couldn’t get paid, but bills kept coming in: utilities, gas, groceries, daycare, and more. Before the shutdown, Literman and his wife had little debt — and they were working towards having none. But a few weeks into the shutdown, they started paying their expenses with their credit cards.

“We’re up to the gills on a lot of this and we’ll be able to pay some of it down. But it’s basically going to just reset everything that we had worked towards,” he said.

The vast majority of the 800,000 government workers who were affected by the shutdown have received their back pay. But missing two paychecks forced many of those workers to tap into their savings or take out loans. Others got unemployment benefits that they now have to pay back. Now that Literman and others have received their back pay, they’re faced with a choice: either pay down their debt a little at a time while saving some money for a rainy day, or pay off debts as quickly as possible while saving nothing.

Borrowing money to fill short-term gaps in income can be, “the beginning of a slippery slope in terms of the damage that can do to somebody’s financial situation,” said Bruce McClary of the National Foundation for Credit Counseling. That’s especially true during an emergency, he said. “Oftentimes people overlook some of the finer details of what they’re getting into.”

McClary estimates that about a third of those who borrowed during the shutdown will wind up carrying some of the debt they accrued into the future — especially if they already had debt.

“It just makes it more difficult to regain your footing and return to a point where you’re financially stable,” he said.

Even when workers receive all of their back pay, they may not immediately clear debts or replenish savings. Brigham Young University behavioral economist Brigitte Madrian says studies show that people tend not to pay down debts even when they can.

“People tend to be overly optimistic about what types of things might befall them in life,” she said — even if they’ve just gone through a difficult period like the shutdown.

As for Robert Literman, this week, he took advantage of the fact that his National Science Foundation grant lets him take his salary whenever he wants to: He paid himself not just for this month but for next month, too.

“If the rumblings in the air seem worse I’ll probably take the rest. There’s really no upside or downside to either way the money just sits in my account or their account,” he said.

That way, if the government shuts down again, he won’t have to go without his salary.