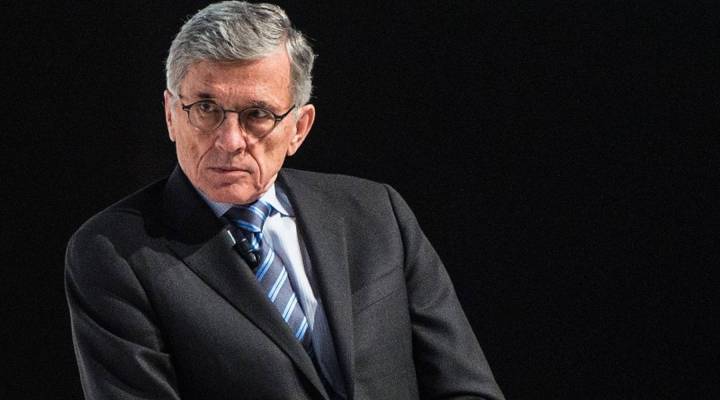 COPY
"If cybersecurity is one of the principal challenges that will define the remainder of the 21st century, then let's have a Manhattan Project to make sure we've got that security," says former FCC Chairman Tom Wheeler. Photo by David Ramos/Getty Images
Marketplace Tech Blogs

"If cybersecurity is one of the principal challenges that will define the remainder of the 21st century, then let's have a Manhattan Project to make sure we've got that security," says former FCC Chairman Tom Wheeler. Photo by David Ramos/Getty Images
Listen Now

The United States and several other countries have made it clear that they don’t want hardware from Chinese telecom giant Huawei to be part of future fifth-generation wireless networks. They’re worried that Huawei could install backdoors in a 5G network that could let the Chinese government, companies or hackers spy on information crossing that network. But no matter who is building a 5G network, there will be cybersecurity threats. So who’s in charge of making sure that protection against hacking, spying or other cyberthreats is built in from the ground up? Molly Wood talks with Tom Wheeler, former chairman of the Federal Communications Commission from 2013 to 2017. He’s now a visiting fellow at the Brookings Institution. He says the government should be in charge. The following is an edited transcript of their conversation.

Tom Wheeler: When I was chairman of the Federal Communications Commission and we opened up the first airwaves for 5G, we established a requirement that the standard for 5G would have to deal with cyber and prevent cyber intrusions. Then we opened up what was called the notice of inquiry in which we said to all the best minds in technology, tell us exactly how to achieve that. Let’s get everybody putting input here and we’ll focus that into the 5G standard process. When the Trump FCC came in, they walked away, they extinguished both of those initiatives.

Molly Wood: I can’t believe that the companies who are building out these networks aren’t thinking about security at some level. Are you saying that what we really need is that security strategy as an international standard?

Wheeler: Yeah, that’s it. In no way am I impugning the integrity or intent of the networks. But we are the representatives of the people, the government, overseeing the delivery on what we all agree is necessary.

Wood: What would it look like if there were a coordinated effort to build in security first?

Wheeler: If cybersecurity is one of the principal challenges that will define the remainder of the 21st century, then let’s have a Manhattan Project to make sure we’ve got that security. Let’s just not do it on a, well, this company will go this way or that company will go that way, we’ll have some meetings where we’ll talk about things. There are some significant challenges that ought to be coordinated and should be overseen with the force of government.