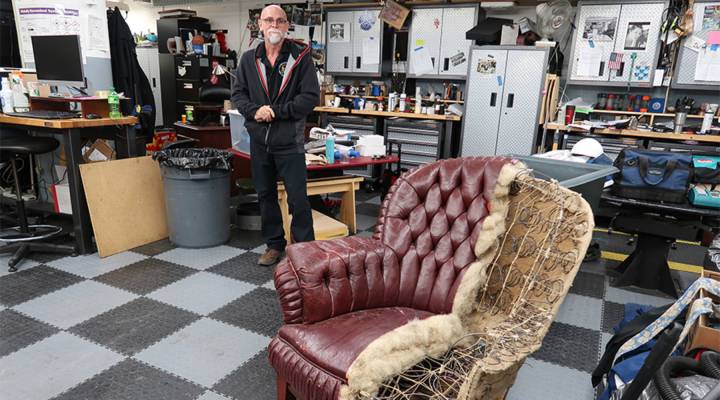 COPY
To restore century-old "Turkish" chairs like this one, Mike Dean will use the original plans and actual horsehair for the stuffing. Kimberly Adams/Marketplace

To restore century-old "Turkish" chairs like this one, Mike Dean will use the original plans and actual horsehair for the stuffing. Kimberly Adams/Marketplace
Listen Now

Welcome to congressional musical chairs. The government may be partially shut down, but movers, technicians and craftsmen have been at work up to 12 hours a day since the holidays to get the 116th Congress — and all that goes with it — up and running. Office-wise that is. And that’s just for the House of Representatives.

According to the office of the chief administrative officer (CAO), it will require about 278 separate moves to get everything — and everyone — into position. The CAO provides and manages the furniture, tech equipment, and many other administrative functions for members of the House and their staffs.

First-time members will account for only 89 of the moves. The greater work is making all the changes required by the shift from Republican control of the House to Democratic control. Roughly 15,000 pieces of furniture and another 15,000 pieces of equipment need to be moved.

But first, 1500 leather and upholstered items need to be cleaned or repaired, and several hundred pieces of wood furniture need to be repaired or refinished. Many of those pieces are antiques, according to Tom Coyne, Chief Logistics Officer at the CAO. Of the roughly 100,000 items Coyne’s office manages, about 5,000, he said, are considered “historic.”

The repairs happen in a series of workshops tucked away in the tunnels that connect the various House office buildings to Capitol Hill. Tasks like carpentry, cabinetry, refinishing, upholstery and even the sewing of custom draperies are often done in-house, by craftspeople who have been honing their skills over decades. Here are a few of their stories.

Harris started refinishing furniture for the House just out of high school. He’s worked for 30 years and spends most of his time meticulously smoothing out the nicks, dents and scratches on antique desks, tables and other furniture, preparing them for Representatives’ offices.

Morgan’s technical title is “Master Carpet Mechanic,” and he and his team spent the holidays laying carpet starting at 5:30 AM to get ready for the new Congress. He said for every member that leaves, six to eight moves are triggered.

Dean started out sweeping floors in the CAO’s upholstery shop.  35 years later he’s now the lead upholsterer. The 1930s era sewing machine on which he learned the craft now hangs on a wall above where he works, sewing window treatments or restoring leather furniture.

When Dahlstrom started at the CAO 30 years ago, “the desks still had spring-loaded pullouts for typewriters.” He and his team take some of the House’s many “historic” pieces and update them for modern use.