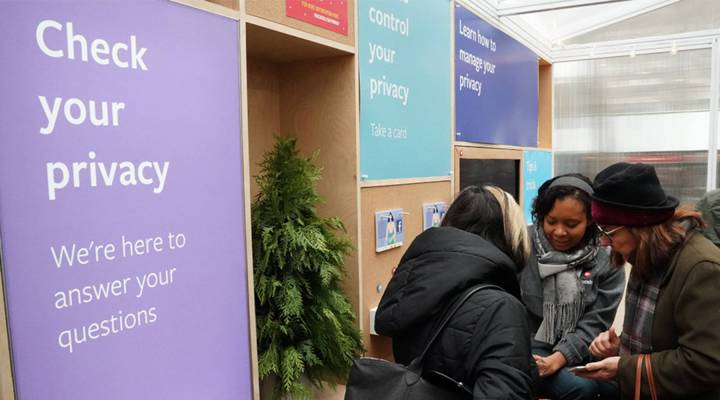 COPY
Facebook employees talks to visitors as the social network Facebook opens a pop-up kiosk for one day on December 13, 2018, in Bryant Park in New York, where it will field questions about its data-sharing practices and teach users how to understand its new privacy controls. Timothy A. Clary/AFP/Getty Images
Marketplace Tech Blogs

Facebook employees talks to visitors as the social network Facebook opens a pop-up kiosk for one day on December 13, 2018, in Bryant Park in New York, where it will field questions about its data-sharing practices and teach users how to understand its new privacy controls. Timothy A. Clary/AFP/Getty Images
Listen Now

It is New Year’s Eve, and that means we made it to the end of 2018, which was by any account a huge year in the world of business and technology. Some of the biggest stories include the gigantic data and privacy scandals, Amazon’s search for a second headquarters and MoviePass turning out to be too good to be true. This week, we look back at the year that was — and ahead to the stories that will be big in 2019. Molly Wood talks with Tom Merritt, host of the “Daily Tech News Show.” He and Molly agree: Europe dropped the mic on tech and privacy this year with its big new law, the General Data Protection Regulation. The following is an edited transcript of their conversation.

Tom Merritt: [The GDPR] looms over everything because every company that does business in Europe has to comply with it. Every company that is big in the United States does business in Europe, and complying with it usually has knock-on effects to the way it handles privacy in other markets. A lot of times companies are saying, “Well, we’ll change our practice in Europe, but we’ll also just change it everywhere else for simplification.”

Molly Wood: Yeah. The GDPR got a good edit in a sense because it coincided I think with what I thought was sort of the biggest trend of the past year, which was this sort of collective awareness of the business model of the internet, as exemplified by Facebook and Cambridge Analytica. You know, there’s the bargain we thought we were making, which was giving some data in exchange for free services. And then I think there was this realization that, “Oh, wow. We thought we gave our data to one site. Turned out we gave it to everyone.” And it turned out they printed money off of it. Do you agree? Do you think that case changed a lot for how we think about privacy?

Merritt: You’re absolutely right. I find the case odd, but as most things are it’s not the best example of this. A lot of the people reporting on it were shocked, shocked to find that this kind of practice is going on. It wasn’t new. It hadn’t not been reported on. And this actually wasn’t the most egregious example we’ve ever seen. But because of a nexus of events regarding attitudes towards Facebook and attitudes towards politics, it blew up and became the poster story for this issue.

Wood: Yeah. It was actually quite a momentous year, you could argue, in tech events. What’s a big one for you?

Merritt: I think the other thing we’re seeing trend-wise this year is the eruption of streaming video as a battleground for companies who want to be in it before it really does overtake cable. The writing is on the wall. Everyone knows that streaming video is overtaking traditional cable service. And everyone is getting into position. The biggest example of that is Disney fighting off Comcast to buy a large majority of Fox in order to get a back catalog of television from FX and FXX and Fox studios to put in streaming services. But also it looks like they’re going to get full control of Hulu after that. So Disney will be in good position to continue to compete with Netflix and Prime Video after that acquisition.