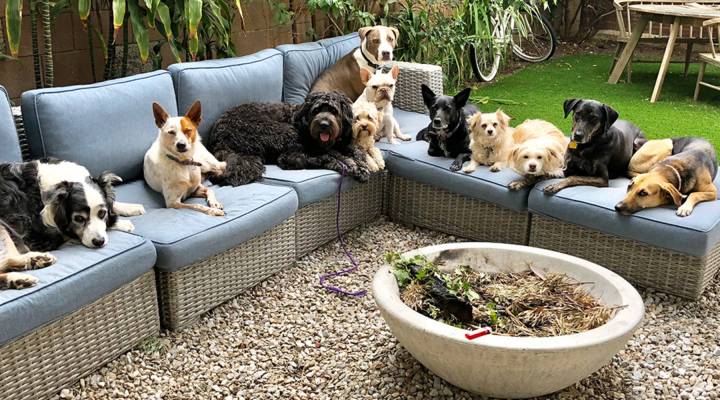 According to the American Pet Products Association, Americans spent over $69 billion on their pets in 2017. Of that, over $6 billion went to services like groomers, dog walkers and trainers. It’s this last category that Renee Bogaarts falls into. Bogaarts runs Dingo Doggies in Los Angeles, a dog training service that got its start with a troubled rescue and a lot of Animal Planet.

My name’s Renee Bogaarts. I’m a dog trainer, and I started Dingo Doggie’s in 2014. And I live in Santa Monica, California.

Before 2014 was a little bit rough for me personally. I’d come out of a relationship quite abruptly that I didn’t see coming. I found that a lot of my happiness came from when I was with my dogs.

The dog I rescued, her name was Lola. I took her home and it was very, very hard. She was so fearful and she’d wet herself and she’d get aggressive. And every day, all I did was watch Animal Planet and talk to trainers and talk to vets and try clicker training and try treats. And whatever she’d respond to in a positive, confident manner, I would keep doing. Beautifully, she transformed and became the most amazing dog of all.

I started getting random calls from people. “Hi, you don’t know me but one of my neighbors said that you had this crazy dog and you transformed it. I was wondering if you could help me with my dog.” I would say, “Sure, I’ll come and take a look.” And then they told their friends, because it worked. At the same time, I was working in restaurants. I didn’t have the main source of income from doing the dogs. You know, I was making $40 some days. Other days I made nothing. So in the beginning, I really wasn’t supporting myself. There came a point where I just said, “OK, I need to start charging people, and I need to get rid of this waitressing thing because there’s not enough hours in the day.” And so I started charging and people started paying, and it took a lot of energy and a lot of time out of me that I just bumped up the prices incrementally.

Dogs have really, in a sense, schooled me. I prefer their company over humans. I love the company of humans as well. But there’s nothing better than having a great dog next to you.

This series only works with your help. Let us know how your economy is doing using the form below, and your story may appear in a future My Economy.