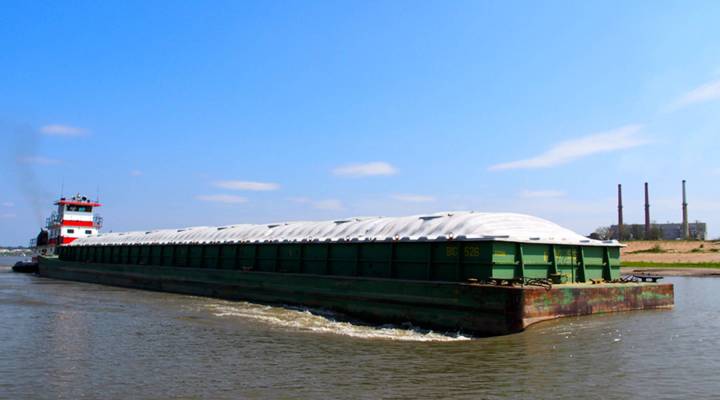 COPY
A loaded barge is seen near the Mississippi River port of Memphis, Tennessee, on Aug. 15, 2012. Robert MacPherson/AFP/GettyImages
Trade showdown

A loaded barge is seen near the Mississippi River port of Memphis, Tennessee, on Aug. 15, 2012. Robert MacPherson/AFP/GettyImages
Listen Now

As the trade war rages on, one industry is stuck in the middle of it all: shipping. Up and down the Mississippi River you’ll see lots of farm goods that have been slapped with tariffs. And down in Mississippi tariffs aren’t just in the headlines, they’re on a lot of people’s minds since so much local business is connected to agriculture and trading on the river. To give us an update, Kai Ryssdal called up Austin Golding, president of Golding Barge, for some insight on how business has changed with the tariffs. The following is an edited transcript.

Kai Ryssdal: Think big picture for me, with all the news of the economy and tariffs and trade, and you being a guy who’s kind of at the intersection of what goes up and down the Mississippi River, which is heavily trade dependent, how are you feeling?

Austin Golding: I feel cautiously optimistic right now. I think as long as the economy is rolling we are a beneficiary and we’ll see our volumes stay the same. And kind of the more physical side, I think what our industry is seeing affect us the most is steel prices. What we operate is made of steel: boats, barges. As steel speculation and steel prices increase it’s definitely going to limit expansion, new construction and it does increase the value of the fleet in this country now. But as steel prices go up, repair and construction costs in our industry rise with them.

Ryssdal: Yeah, so let’s say you had to go out and buy a new barge or a new tug whatever you got to do and you have to make that capital expenditure, would you think twice?

Golding: I absolutely would. That being said, there’s some equipment out there now that as those economics come into play, it makes older equipment more attractive now. You can actually afford to put more money in older equipment and also in the new tax law you can enjoy the full depreciated value of used equipment in the first year. So, retrofitting could have an increase over the life of existing equipment could be extended.

Ryssdal: How are you feeling about the next year, 18 months?

Golding: Well that’s a great question Kai, because I think right now we’re looking at a year out, 18 months out, of what these impacts could be. And I think obviously the largest sector that could be impacted is the agri-sector of our business. Now if these trade tariffs cause a huge recession within the agribusiness you’re going to see volumes in the river decrease. Kai, our game is anything northbound is headed to market. Anything southbound, for the most part is headed for the world market. And if we eliminate the world market our southbound cargoes are going to be really affected. Three sectors that we see now that have volumes that are increasing substantially outside the agribusiness are coal, ethanol and frack sand. All related to the energy industry

Ryssdal: Sure, of course. Because that’s where the president wants to devote his energy policy, that makes a lot of sense.

Ryssdal: Before I let you go let me get a reality check on how much people outside the news business are paying attention to the trade and economic news? I mean when you go down to the general store in Vicksburg or you go to the target or a cup of coffee or whatever. I mean is it top of mind or are you guys worried about other things?