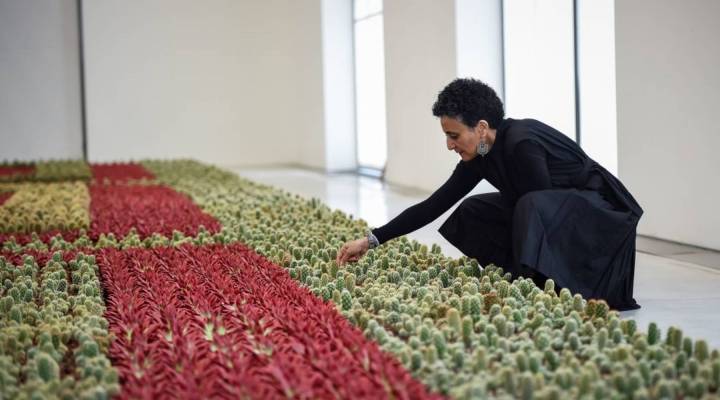 COPY
French-Egyptian artist Ghada Amer poses near her work entitled 'Cactus Painting' on May 31, 2018. It has a lot of succulents.  GUILLAUME SOUVANT/AFP/Getty Images

French-Egyptian artist Ghada Amer poses near her work entitled 'Cactus Painting' on May 31, 2018. It has a lot of succulents.  GUILLAUME SOUVANT/AFP/Getty Images
Listen Now

When things get popular on Instagram, there’s probably a profit to be made. That’s just what happened with the popular succulent house plant. Marketplace host Kai Ryssdal sat down with Alyssa Bereznak of the The Ringer, who wrote “How Succulents Took Over Instagram,” to talk about how the plants are a booming business. The following is an edited transcript of their conversation.

Kai Ryssdal: Not to take issue right off the bat, but the subhead on this thing says 30 years ago the “mostly unkillable plants.” And I will tell you that I now have a dead succulent on my desk. It’s been dead for about two years. It’s still there.

Bereznak: Well, whose fault is that?

Ryssdal: Yeah, yeah but the point is they are not, they are not the be all and end all, right? You’ve got to treat them as plants.

Bereznak: Yeah, they’re not these invincible beings. I will say they are the preppers of the plant universe, though. They do a lot to survive on their own.

Ryssdal: Well, which makes sense and which we’ll get to in a minute. Let me ask you this though, they have become now, seemingly out of nowhere, kind of a thing.

Bereznak: They are kind of a thing. I would say it’s a combination of things. First there was a drought and that really contributed to their use in landscaping.

Ryssdal: You’re talking about the one out here in California, right?

Bereznak: Yes, the one out there in California. But also they look really nice on social media. I mean they also just are incredibly practical when it comes to online shipping. That’s how millennials shop now. So a millennial is not going to go to a plant store — that involves talking to people. This is like just a really automatic thing: You type in succulent in your search bar in Amazon, you don’t have to pay any shipping and it arrives on your doorstep, and all of a sudden you have a nice decoration in your home.

Ryssdal: You mentioned millennials, I chuckled, but the rise in I think what you call in this piece “millennial gardeners” is kind of stunning.

Bereznak: Yeah, I mean they’re just blowing up. Partly it’s a cheap way to take care of a living thing. If you kill a plant, you can start over. It’s also low maintenance. I mean, succulents, like I said, do a lot to survive on their own, and, you know, we’re all very busy. We work constantly on our phones and our laptops. So those are a lot of the reasons that I think younger people are getting into gardening.

Ryssdal: Right. There are also breeding programs and I guess international smuggling operations with succulents?

Bereznak: Yes, they are a hot commodity. Altman Plants, which is the largest succulent provider in the United States, they have two breeders and their jobs are basically just to develop very people-friendly and colorful plants. And I’m talking iterations like the Christmas Sleigh aloe, which is this beautiful sort of green and red plant with pretty bumps on it, and it’s just like looks great in a square in your feed. It’s perfect for that.

Bereznak: On your Instagram feed. Yes, the only feed. And as for smugglers, yeah, there was an operation that was bringing them back to Asia. They were just taking them out of their natural habitats in Northern California. That was a wild thing that happened recently, and they were making a pretty good amount of money per plant.

Ryssdal: Amazing. All right, so I have confessed my succulent-killing tendencies. You have succulents in your apartment? I mean, how are you doing it, right?

Bereznak: I do, indeed. I’m a proud plant mom.

Ryssdal: How many? Give me a clue.

Bereznak: I think it’s about, I’m at 10 now, so I’m bringing them into the office more often because they, you know, they sprout little pups, too.