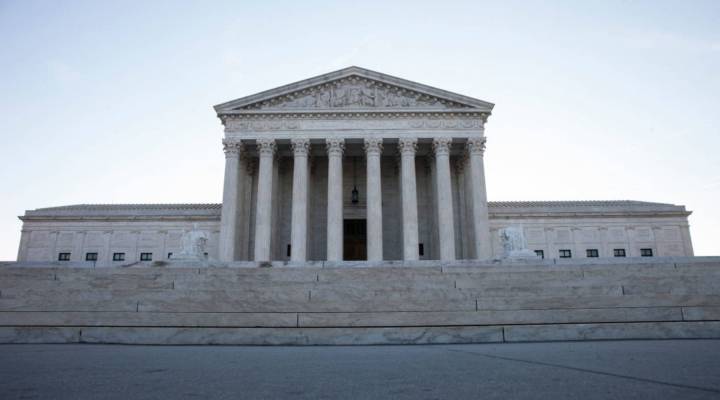 David Brancaccio and Ali Oshinskie May 22, 2018

The Supreme Court has ruled that employees who agreed to settle disputes with the boss through individual arbitration can’t later join big class-action lawsuits.

The decision has received criticism from worker rights advocates, who say it will make it harder for employees to sue for lost wages, and publications like Slate, which wrote that the court “just demolished labor rights” and legalized wage theft.

We asked veteran Supreme Court watcher Amy Howe, co-founder of SCOTUSblog, for her perspective on how far she think this ruling went.

Amy Howe: It went pretty far. I’m not sure I would call it wage theft. What the Supreme Court ruled is that employers can require employees, as part of their employment agreement, to agree to arbitrate proceedings individually. And so this does mean that individuals probably are more likely not to bring their claims simply because it can be expensive to bring a claim to arbitration all by yourself, whereas it might be more worthwhile to do it as a group. But that’s what the Supreme Court ruled yesterday.

Howe: I think that’s right and that’s what Justice Ruth Bader Ginsburg in her dissent — which was significantly longer than the majority opinion — suggested. That employers may be more likely to cut corners, she said, because they know that it’s less likely to lead to any claims at all, much less a large class action or collective arbitration.

Brancaccio: Interesting connection between this arbitration case and predators in the workplace, #MeToo movement. Sometimes harassed employees have to go to arbitration and can’t join a bigger suit.

Howe: Yes, and this is actually a pretty big controversy in the legal field this spring. In the midst of the #MeToo movement, it was revealed that some of the big law firms which run these programs, where they bring in promising young law students to work as summer law clerks at very high wages relative to their experience and hope that they’ll come back and work for them later on, were asking these summer law clerks to sign agreements agreeing to arbitrate disputes including any sexual harassment disputes. And there was a big uproar and many of the firms actually withdrew them. But that’s another concern.

Brancaccio: You and I are also looking ahead to a closely watched case that’s due from the high court over union dues. Can people who get the advantages of what the union has negotiated but don’t want to join the union, do they still have to pay the union? Does this pro-company decision on arbitration, you think, offer any hints about how that union dues case might go?

Howe: Well, the legal issues are different. This is no secret that the Supreme Court has leaned pro-business for some time, and with the substitution of Justice Neil Gorsuch for Justice Antonin Scalia, is likely to do so in the future. We know that the Supreme Court, as it was in the arbitration case, is closely divided on the union fees issue because they actually have heard this issue, not this case but this issue, twice. They heard oral arguments in a different case out of California presenting the same issue before Justice Antonin Scalia died, but hadn’t issued their opinion. And so after he died they released an order that said essentially, “We’re deadlocked.” And so it took about a year and a half, but then the issue of the union fees came back and it’s really going to come down, we expect, to Justice Neil Gorsuch. And so you know it’s almost certainly going to be another 5-to-4 decision. And based on what we know about Justice Gorsuch, it seems likely that the people challenging the union fees are going to prevail. But we’ll have to wait and see.