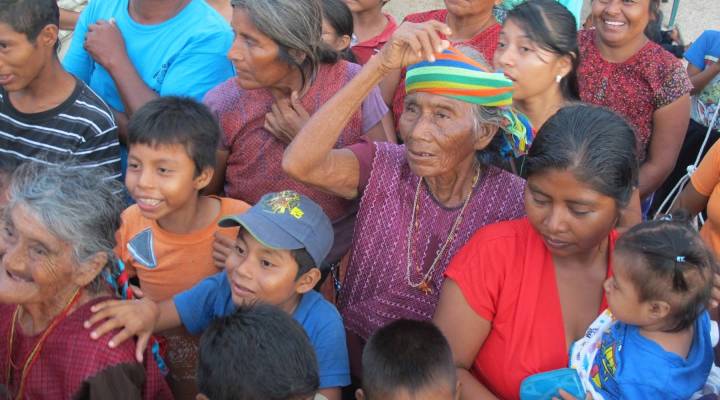 COPY
Women and children wait in line before a truck distributing food and clothes in the Mexican town of San Mateo del Mar, Oaxaca. Mexicans were already struggling with rising food prices this year, and now the problem has gotten worse in many rural parts of the country recovering from two earthquakes that struck last September.   Levi Bridges/ for Marketplace

Women and children wait in line before a truck distributing food and clothes in the Mexican town of San Mateo del Mar, Oaxaca. Mexicans were already struggling with rising food prices this year, and now the problem has gotten worse in many rural parts of the country recovering from two earthquakes that struck last September.   Levi Bridges/ for Marketplace
Listen Now

The two massive earthquakes that devastated Mexico in September left thousands of people homeless and drove up food costs in many of the affected areas. Even before the disaster, many Mexicans were already struggling with rising food and fuel costs. The Mexican peso hit an all-time low this year, in part because of trade threats from President Donald Trump. And now the earthquakes have made it even harder for low-income Mexicans to make ends meet.

In the southern Mexican state of Oaxaca, by early October federal disaster relief has started to reach people who lost their homes in the small town of Ixtaltepec. On a recent sunny afternoon locals waited in line to receive federal money from bank tellers in the town plaza, who use cash machines to count out bills because the ATMs no longer work.

Faustina Benítez, 56, lost her house in Ixtaltepec and her business. Before the earthquake Benítez sold totopos, a crispy tortilla typical in the region. Now Benítez is out of a job, and the rising price of food in this part of Oaxaca state has made it even more difficult to survive.

“I’ve always lived day-to-day,” Benítez said, “so even if the price of food goes up by just a few pesos that’s a lot for me.”

In the nearby city of Juchitán, food vendors moved their stands into the town park after the earthquake destroyed the local market. Vendor Wilber Santiago, 41, hawks produce at passersby next to women selling dried fish and sea turtle eggs covered in sand. “The price of everything here has gone up,” Santiago said.

Vendors in Juchitán complain that the cost of vegetables, especially onions and tomatoes, has skyrocketed since the earthquake. Sales are also down. The higher foods costs mean less people are coming to shop at the market.

Despite the increase in food prices, not everyone is convinced that the long-term economic outlook is bleak for Mexicans living in rural regions affected by the earthquake.

Pérez said that the Mexican government continues to invest hundreds of millions of dollars in disaster relief each year. When earthquakes or hurricanes strike the country that money helps provide Mexicans with basic necessities like shelter, food and water. The economic aid should eventually help lower food costs.

“In the next year there’s going to be a lot of money for the construction and the recovery, so that’s good for the economy,” said Eduardo Reinoso, a seismologist at the National Autonomous University of Mexico who studies earthquake response.

As aid continues to pour into rural parts of the country where fresh vegetables remain unaffordable, the earthquakes have also highlighted a very important truth: Many Mexicans were struggling to put food on the table long before natural disasters hit.