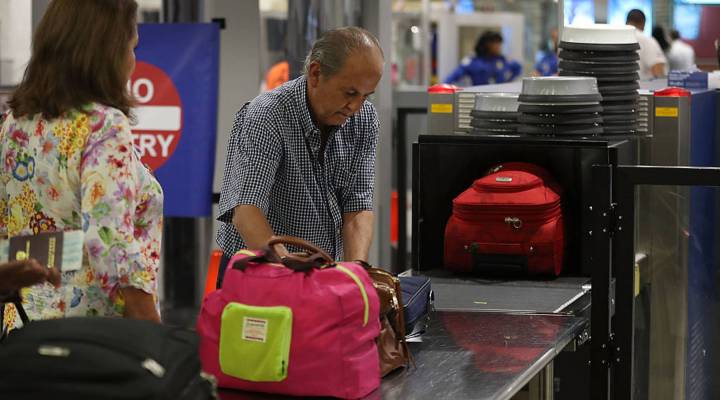 A lot of us will spend some time at an airport this summer. You may have noticed airports are getting bigger, with ever longer distances to traipse, not to mention longer lines to stand in. And that can be a challenge for older flyers – a group that is growing fast.

Midge Offel is one of them. She’s 87 and traveling alone from Los Angeles back home to San Francisco. She doesn’t fly much these days, but still enjoys it when she does, though she doesn’t enjoy the hanging around.

“It’s hard for me to stand for any period of time,” she said. “So if there’s a lot of passengers and I have to wait in line, that’s the hardest part.”

That fatigue is just one of the things mentioned in a 2014 study about older flyers, produced for the Transportation Research Board. Others include difficulty reading signs, handling bags and walking long distances. Jonathan Massey is a managing principal at Corgan, the architecture firm which wrote the report. He said airports would have to spend money to make design changes.

“Finding different technologies, different systems and ways to move those people around does point you in the direction of a much higher level of investment,” he said.

Airports and airlines largely rely on relatively low-cost assistance for older travelers, like wheelchairs and carts. But those solutions don’t always work.

Last Thanksgiving Lauren Tucker and her 85 year old mother were heading to Charleston, South Carolina and had to switch planes in Charlotte, North Carolina. But the cart that was meant to get them and a lot of other seniors to their connecting gates didn’t turn up. The minutes ticked past. Everyone was getting anxious. Tucker decided to take the initiative.

“I finally just started running down the concourse looking for somebody with a cart,” she said.

She flagged one down, then ran ahead to the plane. They barely made it, then the doors closed behind them.

Joan Eisenstodt knows the feeling. She is 70, and lives in Washington D.C. She works full time as a consultant to the hospitality industry and travels regularly.

She uses a cane at home, but needs a wheelchair pretty much everywhere else. So she books ahead through the airline. But after one recent landing she waited so long for her chair to arrive, even the crew got ready to disembark.

“The next crew was right outside the plane ready to board,” Eisenstodt said. “And in fact they did board, and everybody kept saying well, we’ll check on the wheelchair, and it didn’t come. They were ready to board the next flight’s passengers and I was still on the flight.”

She complained to the airline but they told her it wasn’t their responsibility, because that service was provided by a contractor.

Eisenstodt has had many bad experiences at the airport but one complaint did bring a happy ending.

Brian Kulpin is vice president of marketing and public affairs for Reno-Tahoe Airport in Nevada. Eisenstodt gave him an earful after being marooned outside the terminal one cold morning in her wheelchair, and the airport listened. They brought in a disabilities expert for advice and set up a new drop-off area for wheelchair users. And they’re adding other amenities.

“Visual paging is the next thing we’re looking at here in the airport,” said Kulpin. It will help anyone hard of hearing by displaying overhead announcements on a nearby screen.

Eisenstodt said if only more airports and airlines could make some adjustments it would make her life a lot easier. She gets anxious in the days leading up to a trip, wondering what may go wrong.

Massey said stressed travelers are the last thing airports want, but not for the reasons you might think.

“People who are stressed don’t shop, they don’t spend money, they focus on getting to their airplane,” said Massey.