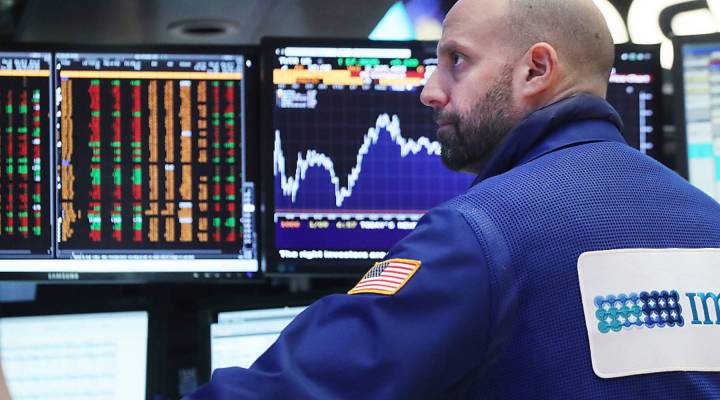 COPY
A trader works on the floor of the New York Stock Exchange. Spencer Platt/Getty Images

Stocks can be influenced by the confidence placed in a country’s “rule of law.”  Investors need to feel like they’re in a fair environment and that there are rules everyone must follow.

Josh Brown, the CEO of Ritholtz Wealth Management, has been reflecting on how the current political environment could impact markets. He joined us to talk about the results of regulation slashes in previous administrations.

David Brancaccio: First, why have you been thinking about the stock market valuations in this way lately?

Josh Brown: Well, I think we’re in a transition at the White House and things are happening very quickly. And I think the ability of social media to amplify some of the internal workings of government is probably freaking people out. And then there’s probably some legitimate reason to freak out. Last night, for example, the sitting attorney general was fired — something we haven’t seen since Nixon. And the Nixon thing is interesting because, you know, we had a massive bear market in 1973, 1974. And it’s probably not an accident that that coincided with Watergate events in Vietnam, etc.. So, you know, I think there is definitely concern that we’re in an elevated valuation for U.S. stocks. And now there are people questioning whether or not we’re going to have a constitutional crisis. And in that environment, you definitely get concerned. You know, there’ll be worries that actually spread to the valuations for stocks.

Brancaccio: So how do you go about thinking about what part of a stock’s value or a whole market’s value is this really bedrock assumption that, well, at least in America we have the rule of law and due process.

Brown: The reason why U.S. stocks trade at a premium to stock markets around the world — one of the main reasons why, there are several, but one of them is that people know that the rule of law is respected. Our financial markets are governed. We’ve got a strong regulatory system. Contract law is first and foremost in business dealings. So when you exchange your dollars for essentially a piece of paper, the only thing backing that piece of paper is the rule of law. So if you feel like the rule of law is being corrupted or disintegrating or worse, then it’s hard to get your head around: “Well, do I really want to pay 25 times earnings or 20 times earnings for a business and I’m only receiving essentially a certificate? Maybe I’m willing to pay less.” And that kind of thinking starts off subconscious, but ultimately that can be very damaging.

Brown:Absolutely, David. When you look at stock markets around the world, where contract law isn’t quite as robust and where people don’t trust the system of government — so you look at a place like China or Russia. These are economies that are growing faster than the U.S. economy. But their valuations and their stock markets are much lower. So Russia trades nine times earnings. China trades seven times earnings. One of the main reasons for that is people don’t necessarily put as much faith in the regulatory regime and in the rule of law as they do here.

Brancaccio: But there’s some irony in this discussion. Yesterday afternoon, President Trump ordered federal agencies to dump two regulations for every one they keep. That is disruptive. By design maybe there’s uncertainty there, but less regulation is something that should prop up share prices if it means more profits for those companies.

Brown: There is this thing where business people rejoice as regulations are slashed, because in the short term there is more room for profitability. There is more room for expansion and to do things that maybe you couldn’t have done prior. Which sounds great, and in theory why wouldn’t we always do that? Then the thing to keep in mind is that, well, regulations are not naturally occurring. We don’t find them in the ocean or in the forest. Regulations are created by governments usually after something goes horribly wrong. And then, you know, we forget why we have those regulations and we cut them. But in the end, when you look at how investors fare on the heels of a deregulation regime — like George W. Bush is, for example — ultimately we take things too far. The party gets out of control and you can look no further than the Clinton-era removal of of the separation between investment banks and commercial banks, followed by the Commodities and Futures Modernization Act from early in the Bush presidency. So essentially, we took all the regulations away from banks, let them trade as though they were casinos, and we took away the regulations around commodities and allowed derivatives to trade freely with no one. looking. And we know how that ended up.

Brancaccio: And as you point out, it’s not the province of one party or the other. This happened in the Clinton era.

Brown: Yes, so Glass-Steagall had protected the U.S. banking system for about 70 years. So of course that had to go. And that was aided and abetted by the advisers who were in Clinton’s ear — many of whom were Wall Street and bankers. And they had an eight-year party, essentially, and it ended around 2007, 2008. So it didn’t take long for them to get carried away once those restrictions were removed. So it’s just a helpful way to think about the yin and yang of regulation deregulation. Probably the truth is somewhere in the middle. This is an administration that wants to cut two for every new regulation. So we’ll see how that goes.