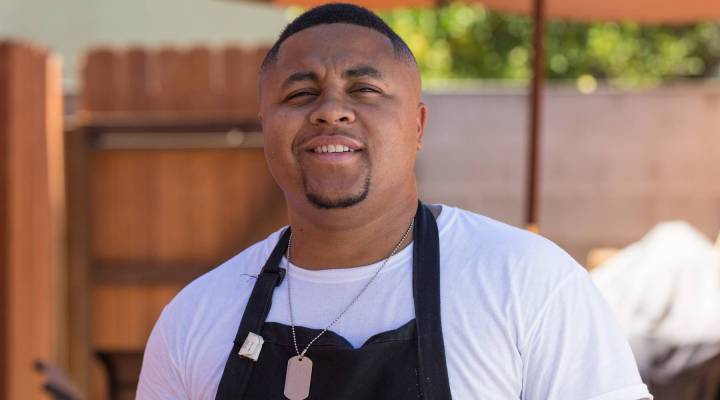 COPY
Craig Batiste — Mr. Fries Man — is part of an underground community of African-American home chefs in and around South Los Angeles who use Instagram to sell home cooked meals directly to customers. Stan Lee/KCRW

Craig Batiste — Mr. Fries Man — is part of an underground community of African-American home chefs in and around South Los Angeles who use Instagram to sell home cooked meals directly to customers. Stan Lee/KCRW
Listen Now

My first encounter with Mr Fries Man happened on Instagram. Scrolling through my feed one day I came across a photo he had posted of a giant mound of French fries covered in a shrimp and lemon garlic sauce. Intrigued, I called the phone number on the post and placed an order.

Then I got a text instructing me to drive to a parking lot in Gardena, a city that borders Los Angeles to the south. “Park near the wall,” the text said “and look for a gray Pontiac Grand Prix.”

I pulled into the lot, saw the Grand Prix and asked the guy inside the car “Are you Mr Fries Man?” He nodded and then he reached into the back seat and pulled out a styrofoam container with my name written on.

This was the first time I’d ever bought french fries from a guy in a parking lot. And I had a lot of questions. Mainly who is Mr Fries Man? And it turns out the guy who handed me my order, was not Mr Fries Man. The real Mr Fries man is a guy named Craig Batiste.

Batiste is part of an underground community of African-American home chefs in and around South Los Angeles who use Instagram to sell home cooked meals directly to customers.

Batiste’s business is run out of the small two bedroom back house where he lives with his fiance, Dorothy Morales, and their three kids. Sunday throught Thursday, Batiste works at Pepsi, where his shift starts at 3 a.m.  After work, he heads straight home to start cooking. Morales begins prepping at about 6 am and after Batiste posts that day’s menu on Instagram.

“The most popular one is lemon Garlic shrimp,” said Batiste, referring to his best-selling menu item.

The menu changes often, but there are always at least five meats and half a dozen sauces available. From these, Batiste makes dozens of combinations.

When Batiste and Morales started selling fries about seven months ago, business was slow. But then two things happened that changed everything. The first said Crag, was the hashtag.

“I started posting in Instagram and one of my buddies Devin said ‘You gotta use hashtags. That’s gonna get the followers up.’ I said ‘Man I don’t believe in that crap.’ And then I started doing it and next thing you know followers started coming in. I said “You know what? This is getting serious.’”

Batiste would post a photo of some fries and add as many as 30 hashtags, things like #fries, #bestfries, #goodeats, #greateats #compton #watts #longbeach and he’d tag foodie celebrities in the photos. As a result, people found him online. Batiste also discovered he was part of a community of African-American home chefs who cross-promote each other’s food through social media.

“We all support each other,” said Batiste. “We swap a plate, man you bring this one, I’ll bring that. What fries you want? And we do like that. It’s like a secret society, a food secret society.”

An order of fries costs between $11 and$24 depending on the number of toppings. The business averages $700 a day in gross profits. Not bad considering Batiste has no labor costs. His friend William Barney, for example, helps out for free because he believes in Batiste’s vision.

Batiste isn’t making enough to quit his day job but he’s saving up, hoping to someday open his own place or possibly a food truck. Until then if you want an order of fries, you’ll have to drive to Gardena and meet a guy in a parking lot.