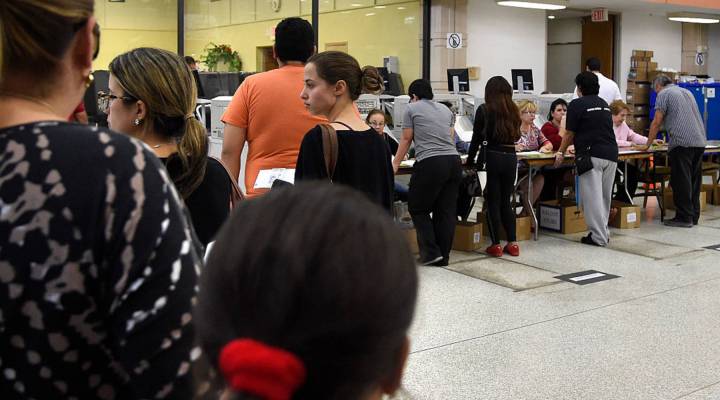 COPY
People line up to vote at an early polling center in Miami. RHONA WISE/AFP/Getty Images

In the battleground state of Florida, a wage-hike proposal (to $12.50 per hour) did not make the ballot. But the campaign for a higher state minimum wage has been vocal and busy, organizing rallies and protests, and putting pressure on state lawmakers on both sides of the aisle. The issue also cuts across party lines among voters in Florida, where the minimum wage is now $8.05 per hour, and will rise to $8.10 per hour in 2017 because of a state-mandated cost-of-living increase.

When Hillary Clinton appeared on Oct. 26 at a packed outdoor rally in Tampa, she included the minimum wage in a litany of economic issues she plans to address.

“We need to raise the national minimum wage so that people who work full time aren’t left in poverty,” she said to a round of cheers. The federal minimum is $7.25 per hour.

Afterward, Tampa Democrat Bob Buesing, who is running for an open seat in the Florida Senate, was working the crowd. He said the state minimum wage needs to come up, and if elected he’ll join other Democrats to press the issue.

Breaking with Republican orthodoxy, Donald Trump has called at points in his campaign for a minimum-wage hike, including at an appearance in Doral, Florida, in July:

In Florida, though, Democrats have not been able to get bills to increase the minimum wage considered by the Legislature.

Some cracks in the wall of Republican opposition have emerged recently. Two South Florida Republicans, running in newly drawn districts with more liberal and minority voters than their previous districts, broke with party leaders in October and announced their support for hiking the state minimum wage.

And Pestana said Republicans increasingly need those voters to win.

A recent University of South Florida-Nielsen poll found 51 percent of survey respondents think a minimum-wage hike — to $15 per hour — would take Florida in the “right direction.”

And it’s a popular cause with voters that Latino advocates have been trying to register and get to the polls this election season in Central Florida. On the penultimate weekend of the campaign, a coalition of groups, including Boricua Vota and #QueVoteMiGente, staged a 60-car get-out-the-vote “caravana” through Puerto Rican neighborhoods in Orlando, with drivers honking and waving flags as they crawled along behind a billboard-truck playing salsa music.

Elizabeth Bermudez came out on her lawn with her father to wave and cheer.

“’Votar para la gente’ means we have to vote for our community, para la gente de nosotros,” she explained as the caravana passed by.

Elizabeth Bermudez is Puerto Rican and a resident of Orlando, Florida, which is a key target for Latino get-out-the-vote efforts this election. Bermudez supports Hillary Clinton and a minimum wage hike above $8.05 per hour in Florida.

Bermudez supports her disabled father and 18-year-old daughter working as a medical bill-coder, for which she completed an associate’s degree several years ago — and incurred $30,000 of student debt. Until recently, she’s mostly worked in minimum-wage clerical jobs.

Bermudez backs Hillary Clinton, and believes as president, Clinton will “help with the minimum wage. We all are surviving, we all are sacrificing. We take care of our children, our husbands, ours home, our jobs.”

Still, a big hike in the state minimum wage is a non-starter for fiscally conservative Republicans — including Anthony Liga, a financial planner in Sarasota.

But the issue also cuts across party lines.

Steve Fyksen is 59 and works as an independent contractor and handyman on residential remodels in Sarasota. He’s a Republican, and has been a strong supporter of Donald Trump since Trump announced he was running for the GOP nomination.

But Fyksen bucks the Republican party line on the minimum wage.

“I believe the minimum wage needs to come up,” he said. “The cost of living has done nothing but go up.” Asked if $15 per hour sounds too high, he responded: “No, I don’t believe so. I’d like to see some of the American people go out there and try to make a living and put a roof over their head and raise a family at $15 an hour. It’s literally impossible.”