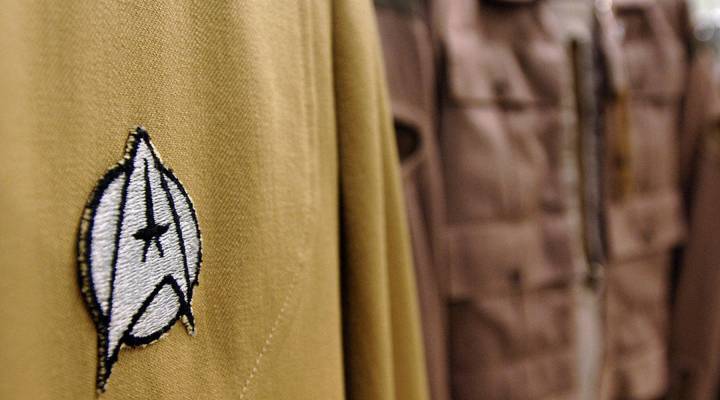 An emblem on a uniform from the Star Trek series is displayed with other costumes during a 2006 auction preview by Christie's at a warehouse in New York. STAN HONDA/AFP/Getty Images

An emblem on a uniform from the Star Trek series is displayed with other costumes during a 2006 auction preview by Christie's at a warehouse in New York. STAN HONDA/AFP/Getty Images

Numbers play a crucial role in the vast, fictional universe of “Star Trek.”

Starships can travel faster than light at factors of Warp 1 through 9, dates are identified through a long series of numbered “stardates,” and even the series’ iconic and over-the-top scientific explanations, or “technobabble,” relied on the strength of numbers to give them legitimate weight. (My favorite technobabble is still “14 kiloquad interface modules” and “25 bilateral kelilactirals.”)

But there’s one number in the “Star Trek” universe that took on a whole life of its own: The number 47.

The 47 “conspiracy” can be attributed to “Star Trek” writer and producer Joe Menosky, who started sneaking 47 into his scripts during his run as a writer on “Star Trek: The Next Generation.” The reason? Menosky is a graduate of Pomona College in Claremont, California, where the number 47 is touted by student and staff as the “quintessential random number” of the universe. This inside joke caught on with other “Star Trek” writers, eventually leaking into the series’ other spinoffs “Voyager” and “Deep Space Nine.”

Menosky is slated to return to the franchise as a writer for the upcoming “Star Trek: Discovery” series on CBS, which means we might see the return of 47 soon.