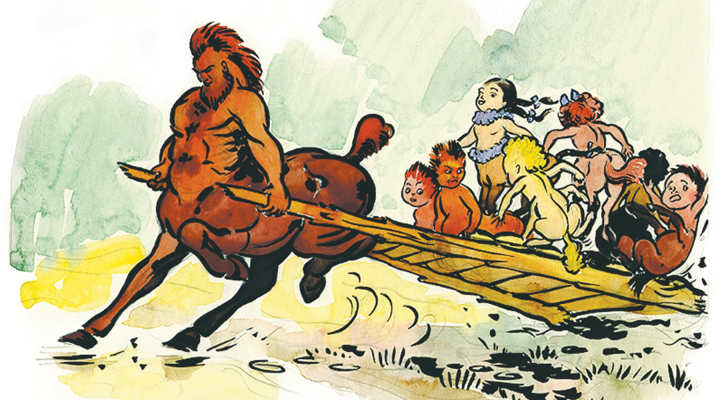 COPY
Sylvia Holland's concept painting for the "Pastoral Symphony" sequence in Fantasia.   They Drew as They Pleased: The Hidden Art of Disney’s Musical Years: The 1940s by Didier Ghez

Sylvia Holland's concept painting for the "Pastoral Symphony" sequence in Fantasia.   They Drew as They Pleased: The Hidden Art of Disney’s Musical Years: The 1940s by Didier Ghez
Listen Now

So far this calendar year, Disney has made more than $2 billion at the box office. That’s thanks to animated movies like “Finding Dory” and “Zootopia,” and also some live action stuff, like “The Jungle Book” and, of course, “Captain America: Civil War.”

But there was a time when Disney wasn’t the entertainment giant it is today, when it was kind of just a place where artists could go and do some creative work.

“The 1940s at Disney are really well known,” said Didier Ghez. He’s the author of a series that looks at previously unreleased concept art for Disney films. His latest volume in the series is: “They Drew As They Pleased: The Hidden Art of Disney’s Musical Years, The 1940s – Part One.”

That period was marked by two significant events. In 1941, there was a strike at Disney’s studio. And of course, the United States also entered World War II, which closed off Disney’s access to European markets. Meanwhile, the box office failures of “Bambi” and “Fantasia” nearly forced the studio to shut down. It would have, had it not been for the success of “Dumbo.”

David Hall’s color masterpiece featuring Peter Pan and Wendy at the helm of the pirate ship was considered as “lost” for 75 years. Featured on Ghez’ book cover.

Despite the tumult, Ghez said it was “the most creative period at the studio.”

Because of the global economic depression, Disney was able to hire highly skilled artists to conceptualize future projects. Not all of them were made in that period. For example, in 1941, Danish artist Kay Neilson completed a series of concept art pieces for The Little Mermaid.

Kay Nielsen for the “Night on Bald Mountain” sequence of Fantasia.

“The artists who worked on the Little Mermaid in 1989, they discovered the art by that artist…and they were inspired tremendously by them and they really used that inspiration to create what became the first animated feature in the new Golden Age of Disney.”