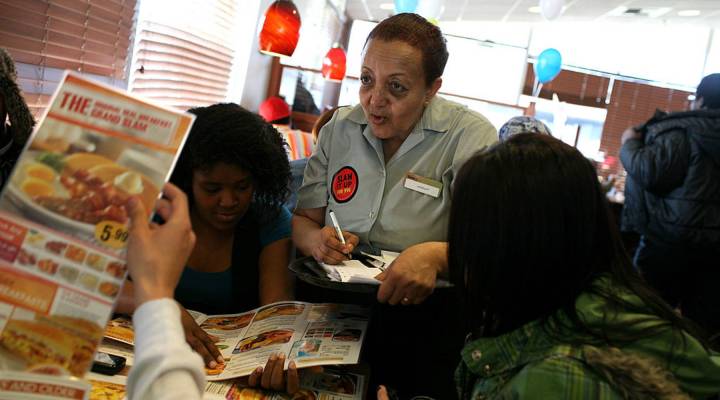 COPY
The current federal minimum wage for tipped workers in the U.S. is $2.13 an hour. Justin Sullivan/Getty Images

The current federal minimum wage for tipped workers in the U.S. is $2.13 an hour. Justin Sullivan/Getty Images
Listen Now

How much tip to leave can be a contentious point of conversation at the dinner table. Should you leave 15 percent? 20? 30? In many states in America, that fraction of your total that you put in the “gratuity” line can mean a lot to those who work in the service industry.

Saru Jayaraman is the director of the Food and Labor Research Center at the University of California, Berkeley, and she’s spent a lot of time looking at the history of tipping in America and why minimum wages for tipped workers can be as low as $2.13 an hour.

Jayaraman is author of the new book, “Forked: A New Standard for American Dining” and spoke with Marketplace’s Kai Ryssdal.

On the history of tipping in America:

Tipping actually originated in the aristocratic homes of feudal Europe…. When tips came to the United States in the late 1850s, 1860s, there was a massive anti-tipping movement. It was actually considered to be undemocratic, un-American…. Well that movement, which came right around the time of the emancipation of the slaves, was squashed by the restaurant industry, which argued that they should have the right to hire newly freed slaves and not pay them anything as valueless people and essentially let them live on customer tips. And so many of the first tipped workers in the United States were former slaves…. And this idea was codified into the first minimum wage law that passed in 1938 as part of the New Deal…. We went from a zero-dollar minimum wage in 1938 to a whopping $2.13 an hour, which is the current federal minimum wage for tipped workers in the U.S.