This spring, two very different bands will reunite on the main stage at the Coachella Music and Arts Festival in Southern California.

Founding members Axl Rose and Slash are playing together as Guns N’ Roses for the first time since 1993, and they’re embarking on a stadium tour expected to make them $3 million per show, with tickets priced at up to $275 apiece. Electro band LCD Soundsystem are also reuniting, but under very different circumstances. The group ended amicably in 2011 with a sold-out show at Madison Square Garden. That show’s live album will be barely two years old when LCD hits the Coachella stage, and a new album and tour are set to follow.

That got us curious about the economics of these big reunion tours, so we called Larry Miller, an associate professor and head of the music business program at New York University’s Steinhardt School and host of the podcast “Musonomics.” The interview has been lightly edited for clarity and condensed.

What was your reaction to these big announcements?

I thought that they were really cool bookings, but for very different reasons. Let’s take Guns N Roses first. This is a band whose live shows have been the stuff of legend when they’ve been on,  and they’ve been the cause of riot or near-riot when they’ve not been on. If Axl shows up ready to deliver, this could be just a fantastic run of dates for them and it could be one for the history books.

For LCD Soundsystem — people love that band. I don’t know the details of their agreement with AEG for Coachella, I’m sure they’re going to be well-compensated for headlining that festival, then going out and doing a run of dates after that. So good on them, and nobody is worried about whether they’re gonna show up or not.

I suppose the benchmark for thinking about these kinds of reunion shows is still the Police, and the tour that they undertook in 2007 and 2008. They had been gone for a long time, their fan base is all grown up now to say the least, but they grossed well over $300 million from over 150 shows around the world, and that too is real business.

In terms of making money for these promoters, are these a sure thing?

I don’t think there is an algorithm. This particular game is all about assessing and building demand against whatever supply exists in whatever markets we’re talking about. I think for GNR truly this could be Police or near-Police money. Although did it over 150 shows. I don’t think anyone — even the most wild-eyed GNR optimist — thinks this GNR configuration is going to hang together for more than 20 or 30 shows.

With LCD Soundsystem, I wonder how many markets there are where they can play a 10- to 18,000-seat arena, and I’ve gotta believe that that number has got to be 25 or fewer.

The marquee at a Guns N’ Roses performance at the Hollywood Palladium on March 9, 2012 in Hollywood, California.

Axl Rose has been touring under the GNR name for years, and even put out an album. In the past few years the Pixies, Black Flag and others have “reunited” under similar circumstances. Does that kind of touring and bad blood hurt the band’s appeal, or does it drive more people to the shows?

What makes it bookable at the arena level is Axl and Slash together on the stage, something that probably will never happen again. In the same way that, when you look at the scarcity around the Led Zeppelin reunion show — people flew in for that from all over the planet in a way that they didn’t when Jimmy Page went out and toured, or Robert Plant went out and toured or even when Plant and Page toured together. There’s something about the configuration with the original members as Led Zeppelin with all the living members that made it a once-in-a lifetime event. Which I wish, by the way, they would go out and tour while they’re still capable of doing it.

So these tours can charge a lot for seats, but there’s a whole other industry orbiting these types of shows, right? When you say the Police made $300 million, that other business isn’t accounted for, is it?

No, those numbers are box office primary ticket sales. They do not include the secondary market, it doesn’t include merchandise, ticketing fees, parking, any of that other stuff. It’s just primary ticket sales, and you can imagine there is a multiplier effect, but it’s hard to apply a rule of thumb for all-in, ultimate revenue generation for a big tour like that, for which demand will be a multiple of the available supply.

One of the other factors here is that different bands attract crowds with varying propensity to spend money on merchandise. Another metric to think about is the merch spend per ticket sold, and that number varies accross the kinds of bands that we’re talking about.

Is it as simple as “the older the act, the more likely t-shirts will be $60?”

There is no general rule of thumb that applies accross the board, but it’s reasonable to assume that for acts that appeal to say, very young kids or teenage girls, where the parents are largely in attendance, that the merch-per-cap is going to be high. It’s going to be high for these legacy acts, where there’s at least a perception that this may indeed be the last time that you get to see them. but for everybody else in the middle it can be all over the map. 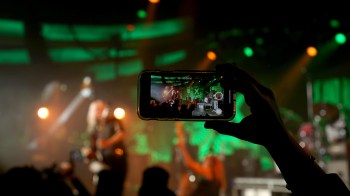