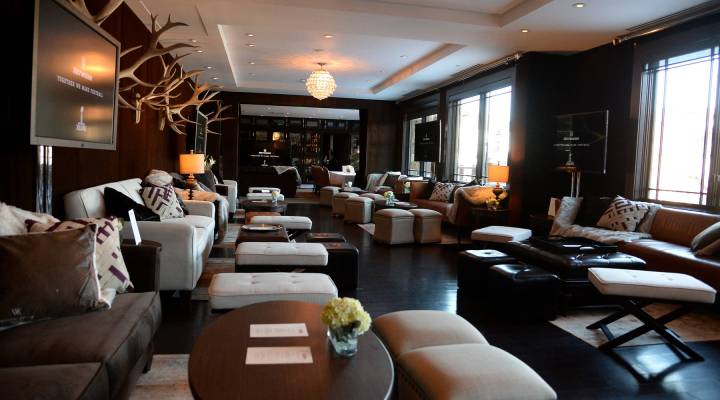 Why do luxury hotels charge for Wi-Fi, but cheap hotels don’t?

Why do luxury hotels charge for Wi-Fi, but cheap hotels don’t?

A question from listener Allison Najman has brought us to New York’s Waldorf Astoria Hotel. The lobby is enormous and elegant. There are staffers everywhere, a check-in desk, a concierge desk, a dining area. President Obama stays here. A room tonight goes for $399 — it’s not their nicest, but it’s pretty lovely.

We head downtown to Hotel 17. The lobby is small and basic. Instead of a giant staff, there’s just a guy. You can stay here tonight for $86, a very good deal in New York.

So it’s not the Waldorf. But the Wi-Fi? Free.

HOW DOES THAT WORK?

Toni Repetti, a hotel management professor at University of Nevada Las Vegas, says on one hand, it’s simple: “The easy answer to that is because they can.”

Luxury hotels can charge more because they know their customers will pay more. Jeff Beck, a former Marriott executive who teaches at Michigan State’s business school, says it has to do with a scale economists call “price sensitivity.”

“The type of people that are going to be staying [at a luxury hotel] are typically there on business, which generally means that someone else is paying for it,” Beck says.

If you’re a business traveler who can stick your company with the bill, you’re hardly price sensitive at all. As for the folks staying at fancy hotels for pleasure? Repetti says their wealth means they’re not very price sensitive either.

Folks at budget hotels, however, are definitely price sensitive. Managers have to keep Wi-Fi free just to compete.

SO… STEAL THE FREE INTERNET AT STARBUCKS?

Things are changing. The website HotelChatter has a long-running survey of hotel Wi-Fi. Managing editor Juliana Shalcross says nearly two-thirds of hotels offer it free, and that number’s growing.

When [guests] go to a hotel and they see that it’s charging them for Wi-Fi, they get a little pissed off and I think they make that known,” she says.

Hotels don’t want angry customers in the age of online reviews and social media. Companies that give hotels a lot of business are complaining too. So many hotels are getting rid of Wi-Fi charges, which sounds great. But, travelers beware: Repetti points out they’re doing something else, too.

“They also are increasing their room rates to make up for that. You may not see that, but they are increasing, even a little bit.”

* CORRECTION:In an earlier version of this story, we misspelled the first name of Allison Najman.  The text has been corrected.