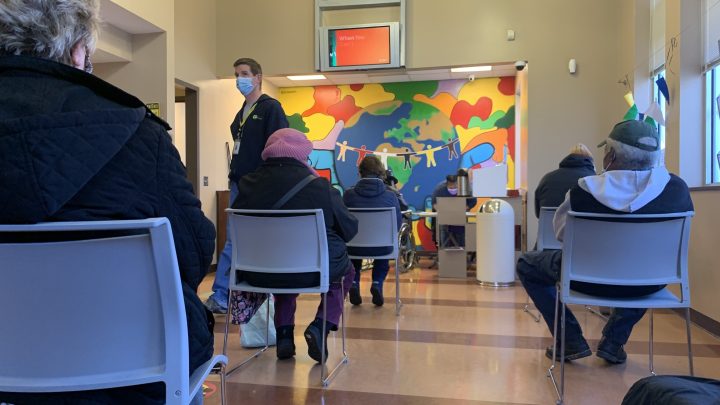 COPY
Patients at a low-income clinic in Nashville wait to be seen. During the pandemic, Medicaid programs were not allowed to drop patients, but income reviews will restart once the public health emergency ends. Blake Farmer/WPLN
COVID-19

Patients at a low-income clinic in Nashville wait to be seen. During the pandemic, Medicaid programs were not allowed to drop patients, but income reviews will restart once the public health emergency ends. Blake Farmer/WPLN
Listen Now

Like many people on Medicaid, Anecia Love of Clarksville, Tennessee, didn’t qualify for the medical coverage until she was expecting her first child.

Tennessee’s Medicaid program, known as TennCare, covered her during her pregnancy in 2021. Then, her son — who was born on New Year’s Eve — automatically received coverage too.

But that coverage for as many as 15 million Americans could be running out as a fraught process known as “redetermination” restarts, following a three-year pandemic pause.

“It is a possibility that I might get kicked off. I do not know. But I hope I don’t. I really need the help,” Love said. States use a complex income formula to determine eligibility.

Love, 24, supports her family with a part-time job at a retail pet store and some cash assistance from the government. She said it’s hard to imagine she could afford their medical bills if they had to get other coverage that requires co-pays and deductibles.

“I’ve been trying to get another job that pays a little bit more, but it’s not been successful because I’ve been taking care of my son,” she said.

During the pandemic, nearly 20 million were added to Medicaid rolls nationwide. People haven‘t had to go through the annual renewal to make sure their income and health still qualify them, because state programs were not allowed to drop anyone during the Public Health Emergency. The Kaiser Family Foundation estimates that states spent about $47 billion in extra coverage, but they received an additional $100 billion from the federal government to cover those costs.

Medicaid programs like TennCare have been trying to warn people that a day is coming — likely in the next few months — when the emergency is declared over and the annual income reviews restart.

TennCare director Stephen Smith said that, in Tennessee, everyone needs to keep an eye on their mail for a bulky packet.

“We want all eligible members to remain eligible, but eligibility is dependent upon providing the necessary information to TennCare,” he said.

But TennCare and some other state Medicaid programs have had problems handling this paperwork — even in normal times.

The Tennessee Justice Center has ongoing litigation representing families who lost coverage during the last round of redetermination through no fault of their own. Forms just never showed up.

“We had thousands of clients who reached out to us in the context of this. Many of them had never moved. They didn’t get the packet,” executive director Michele Johnson said. “So we’re very concerned.”

The concern is especially high for people of color on Medicaid. According to the government’s own data, Latinos will make up more than a third of those to be disenrolled despite being eligible for Medicaid.

Civil rights groups have banded together to ask that Congress step in and simplify the process where it can, like making states automatically renew some people who already qualify for other programs, such as food stamps.

“States — definitely in some cases — are going to feel pressure to knock people off the program to save money,” said Stan Dorn, health policy director of UnidosUS.

Republican governors have already asked the White House to end the health emergency because of the cost, despite taking in more money than they’ve spent on newcomers to Medicaid. But that money will run out following the end of the public health emergency, and it will take years to trim people from the Medicaid rolls.

“If somebody is ineligible, absolutely they should be terminated from Medicaid and transitioned to another program,” Dorn said. “But people … who the state has reason to know are eligible should not be terminated because of missing paperwork. That’s just wrong.”