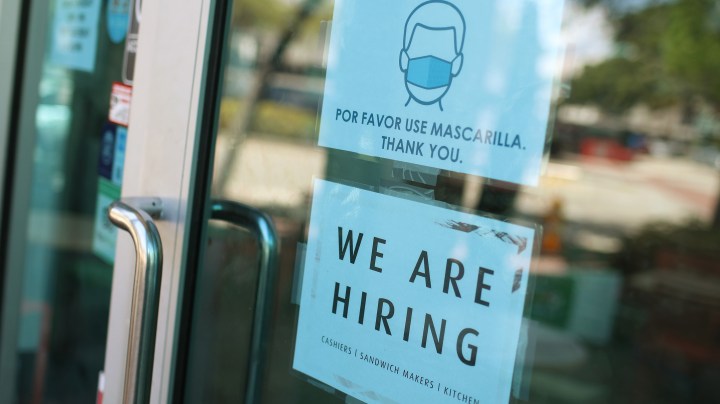 COPY
Since May 2020, the Bureau of Labor Statistics has been asking people whether COVID affected the hours they've worked or prevented them from looking for work. Joe Raedle/Getty Images

Since May 2020, the Bureau of Labor Statistics has been asking people whether COVID affected the hours they've worked or prevented them from looking for work. Joe Raedle/Getty Images
Listen Now

We learned last week that in August, the national unemployment rate ticked up to 3.7%, according to the Bureau of Labor Statistics.

The BLS arrives at that number by surveying households to ask who’s working, who’s unemployed and who’s looking for work. Turns out that in August, people came off the sidelines to return to the labor force, and those who didn’t get a job now count as unemployed.

At the end of its August report, the BLS announced that its next report will mark the end of an era: September will be the last month it’ll ask supplemental questions about COVID to gauge the impact it’s had on the labor market.

The BLS has been asking people whether COVID affected how much they’re working or prevented them from looking for work. The bureau started asking those questions in May 2020, according to BLS economist Rachel Krantz-Kent.

“Businesses were closing, people were being told to stay at home, to socially distance, and so we really were interested in measuring, you know, the impact of those measures on the labor force,” she said.

Krantz-Kent said those questions are getting outdated, so the BLS will start asking new ones, with a focus on telework: How many people work from home at all? For how many hours?

The BLS is trying to wrap its head around some fundamental changes to the job market, according to Megan Greene, chief economist at the Kroll Institute.

“My job, for example, is largely remote, and that never would have been a possibility before the pandemic.”

Misty Heggeness, a professor at the University of Kansas, has been researching the pressures mothers face while working from home.

With this new data, Heggeness said, “we’ll be able to know, did this person actually telework? Yes or no? And then, what do we see in trends for those people who are teleworking compared to those who weren’t — both in terms of moms’ ability to stay attached to the labor market, women’s labor market participation, etc.”

The BLS will start asking the new questions in October.