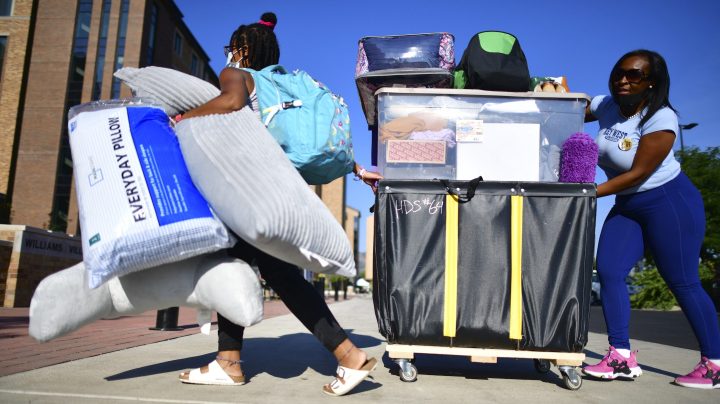 According to the National Retail Federation, total back-to-college spending is expected to reach $74 billion this year, reaching a record high. Mark Makela/Getty Images

According to the National Retail Federation, total back-to-college spending is expected to reach $74 billion this year, reaching a record high. Mark Makela/Getty Images

Ellen Bemis recently moved her daughter, Emily, to the University of Pittsburgh for her first year of college. Coming from Presque Isle, Maine, the family flew to the school and bought most of the things Emily needed once they arrived. They’d been through this before — three years earlier, the Bemis’s made a near-identical trip for their older daughter Grace’s first year at William & Jefferson, less than an hour away from UPitt.

“We did the same thing for (Grace), we flew out, stayed in a hotel, rented a car, bought everything there,” said Bemis. “It was a fraction of the cost.”

The family’s hotel rooms alone were $200 more per night than they had been in 2019. Flights cost significantly more, too. The combined cost of airfare, hotel stay and car rental totaled over $2,500 this year. That doesn’t even include how much was spent, over multiple Target trips, to furnish the dorm room.

“We’ve just really seen a change in the pricing,” said Bemis. “It was an expensive experience.”

Between inflation and pricey electronics, families and students themselves are shelling out more than ever before for indirect (non-tuition) costs.

According to the National Retail Federation, total back-to-college spending is expected to reach $74 billion, up from last year’s record of $71 billion. The NRF’s annual survey found families anticipated spending $1,199, which is $200 more than the average was in 2019. A Deloitte study put that number at $1,600 per child, which is up 18% since 2019.

Families view back-to-school shopping as an essential category, meaning they will cut back in other areas, work extra hours, and use credit cards or buy-now-pay-later to make sure school needs are met, according to Katherine Cullen at the NRF.

While inflation is front-of-mind for many consumers, additional factors contributed to higher spending, said Cullen. For example, the percentage of students who plan to buy electronics was 63%, up from 53% in 2019.

Heather Swift recently moved her daughter Kiran to Penn State for her freshman year. A big ticket item on her shopping list was a new laptop with extra storage.

“There’s just so much more now to set them up for success,” said Swift. “And that’s really what I think every parent wants to do, right?”

For the most part, Pell grants and scholarships won’t cover college start-up items that can include laptops, dorm or apartment furnishings, textbooks and more, said Paula Umaña at the Hope Center for College, Community, and Justice.

For example, many schools have emergency aid funds that can’t be accessed until after classes start, which doesn’t help students who need financial help to move in or purchase a computer for the school year, Umaña said.

A 2020 report by UAspire found that schools often fail to communicate indirect expenses, making the “hidden” costs of college difficult to plan for and leading to students taking on extra debt or not completing their degrees.

And even if students think they have a good idea of what they’ll need to spend on and parental support to cover the cost, it’s hard to tell until they’re already there.

Kristin Konn New said that some of her daughter’s dorm set-up costs were expected. Others just weren’t on her radar, like clothing storage, a textbook that had to be printed, and items for a bathroom in her daughter’s suite-style room at Purdue University.

“There were some things that didn’t fit or that we needed in addition to (what we brought) so we made a trip to the store while we were there,” she said. “We didn’t really think about all those tiny incidentals but they do add up.”

Other costs just remain unknown, like a hotel room if they visit her or the cost to drive her home for breaks. And those hidden, indirect costs really do take their toll.

“For anybody that looks at the price tag of college and sees it as that number,” she said, “you’re probably adding, you know, 5% to that to get them through those years.”