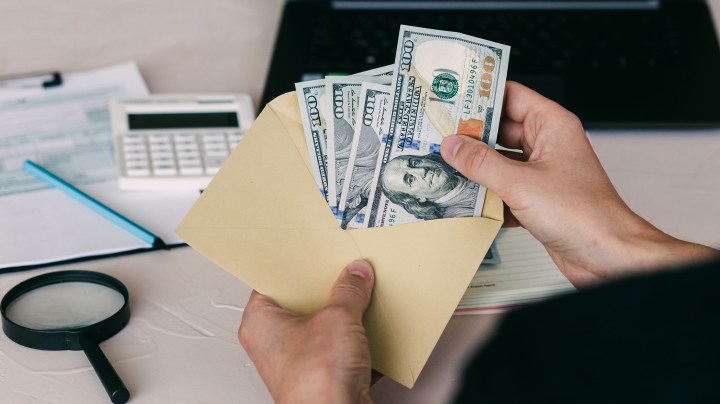 COPY
To help workers deal with high prices, some employers have given bonuses or moved up pay increases. Other approaches include gasoline stipends or additional paid time off. Katsiaryna Voitsik/Getty Images

To help workers deal with high prices, some employers have given bonuses or moved up pay increases. Other approaches include gasoline stipends or additional paid time off. Katsiaryna Voitsik/Getty Images
Listen Now

Inflation has some employers in a pickle: how to keep costs under control and keep workers as rising prices take a bite out of their paychecks. While wages have increased, they haven’t kept pace with inflation. And despite worries of an impending recession, the job market is still pretty tight.

A little over a year ago, St. Louis software developer Jeannie Lin took a new job, and a small pay cut, to do work that felt more meaningful to her: teaching programming to nontraditional students at a nonprofit. Then inflation started making that small pay cut feel bigger.

“I’ve got children, I’ve got a family of four to feed,” Lin said. “And so food costs, just everything is a little bit tighter.”

So she was pleasantly surprised when she opened her company’s weekly all-staff email late last month.

“This one was discussing the inflation concerns,” she said. “There was not a bunch of, like, ‘Let’s all talk — what would help you?’ It was just ‘Here, this is what we’re doing.'”

The company gave all employees a larger-than-expected annual raise and a one-time bonus to help with rising costs.

“And I was like, ‘Wow! I should read these bulletins all the time,'” Lin said. “This is great news.”

A recent survey from the Society for Human Resource Management found that about three-quarters of HR departments are concerned about how inflation is affecting their companies’ workforce. We’ve also seen big companies like Microsoft, Walmart and Exxon give midyear pay bumps this summer.

Jill Chapman with HR services firm Insperity said some employers have simply moved up the pay increases that typically come at year-end, hoping inflation will calm down.

“They’ve just flipped the calendar a little bit,” she said. “Let’s go ahead and help people now rather than waiting.”

But she noted that not all businesses are in a position to permanently increase pay; many are being squeezed by inflation themselves.

“If people really want to get clever and creative, you know, there are lots of perks that you can offer,” Chapman said — things like extra paid time off, child care or free lunches. One business even considered Costco memberships.

Luke Pardue, an economist with Gusto — a payroll and benefits service for small businesses — said gasoline stipends from companies on the platform have grown by 30% over the last year.

“Despite a lot of this economic uncertainty, workers still are in the driver’s seat of this labor market,” he said.

The sectors offering gas stipends have also expanded, he said — from mostly transportation and logistics, where driving is central to the work, to leisure and hospitality, where job openings are still high and employees typically can’t work remotely.

But these kinds of small gestures can get even smaller after taxes and can sometimes feel downright insulting if a company has neglected bigger issues, said David Buckmaster, the author of “Fair Pay” and a former compensation analyst at Nike and Starbucks.

“I can remember one very large retailer that, you know, there was a huge backlash because they launched a meditation app,” he said. “There was this whole response to say, ‘We didn’t want a meditation app, we wanted to be able to pay our rent.'”

“All the warm and fuzzy messages cannot compare with, ‘Hey, I know something that’ll help — here’s some more money,” Lin said with a laugh. “Thank you, that really does help.” Even more, she said, because she didn’t have to ask for it.