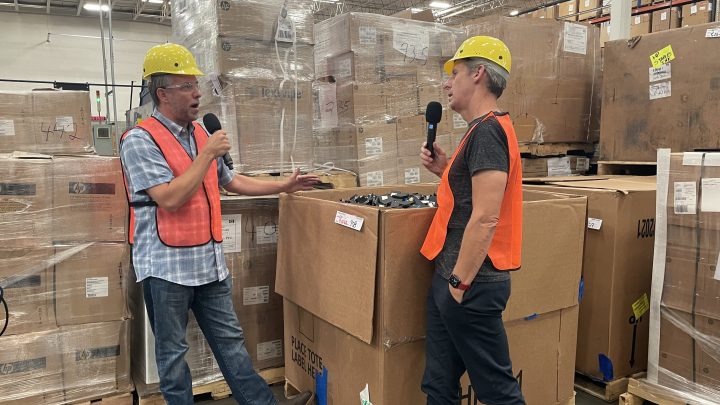 COPY
James McCall, left, and Kai Ryssdal stand next to one of the hundreds of boxes filled with used HP ink cartridges. Andie Corban/Marketplace

James McCall, left, and Kai Ryssdal stand next to one of the hundreds of boxes filled with used HP ink cartridges. Andie Corban/Marketplace
Listen Now

The reconciliation package moving through Congress includes $369 billion to fight climate change, and Senate Democrats’ summary of the deal says it would put the United States on a path to cut around 40% of greenhouse gas emissions by 2030.

Much of corporate America has made climate pledges over the past few years as well. “Marketplace” host Kai Ryssdal recently went to Tennessee for a behind-the-scenes look at how HP, one of the world’s biggest computer and printer makers, is working to meet its sustainability targets. HP has a goal of net-zero greenhouse gas emissions by 2040 across its value chain — that’s the supply chain from start to finish, including emissions from product use at home by the consumer.

“The way that we think about it is anything that’s coming from a recycled source or a renewable source or getting a second life,” McCall said. “So these ink cartridges, what we want is to take this plastic and turn it back into the next device.”

The company has committed to reach 75% circularity for products and packaging by 2030.

“We process nearly 100,000 cartridges a day at this facility,” McCall said. HP ink cartridges of all sizes come to La Vergne from across the United States, Canada and Mexico after consumers return them via mail or by dropping them off at retailers like Staples or Walmart.

The 30 people who work at the facility sort the used cartridges, disassemble them and shred the plastic casings for use in future products. On the day of Ryssdal’s visit, the site manager estimated they were holding 4 million to 5 million ink cartridges.

The first step of recycling those millions of returned ink cartridges is sorting them on a conveyor belt. The system uses cameras and artificial intelligence to group the cartridges by size and shape to make them easier to disassemble.

“We’ve learned our way into this process,” McCall said. “Several years ago, HP had to kind of invent this as we went along. … Some of our first test models were taking an old washing machine and starting to put cartridges in it to see if we could clean them. We borrowed an old chicken processing line from Tyson and we figured out if we could use that for sorting processes. So, what you’re seeing now is the second and third generation of that.”

Once the cartridges are sorted, they head to the other side of the building for disassembly and plastic shredding. A machine scrapes the sticker off the top of the ink cartridges, removes the lids and takes out the foam and precious metals inside the cartridges. That leaves the hollow cartridge, which is shredded.

The average ink cartridge spends two to three months in La Vergne. Then, the finished product — the shredded plastic — is sent to another plant in Canada where it gets mixed with other recycled plastics and turned into pellets. The pellets are sent to HP’s manufacturing locations, including Malaysia and China, where they are used to make new ink cartridges that go to market.

According to HP, its sustainable impact efforts added $3.5 billion in new sales in fiscal year 2021, a three-fold increase over the prior year but still a fraction of the company’s $63.5 billion revenue.

“The scale of the challenge is there, but the opportunity is ahead of us,” McCall said. “As customers start to shift and make these choices, you’re also seeing industry change and customers change as we start to rethink this. That’s what it’s going to take — it’s going to take us rethinking the overall supply chain.”