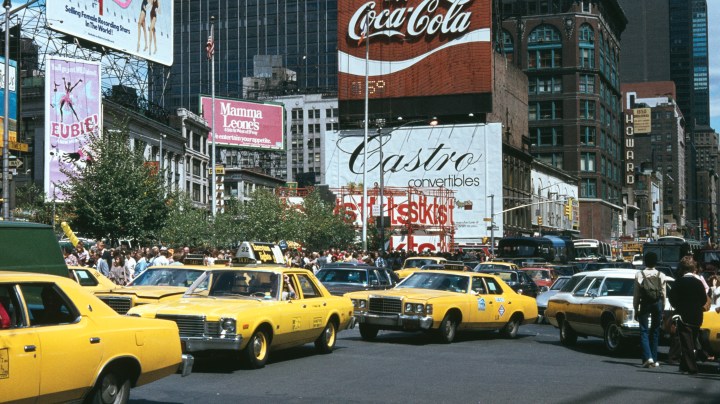 COPY
"Stagflation" plagued the economy of the late 1970s and early '80s. Some marketers saw it as an opportunity to pitch brands as pocketbook friendly. Above, New York's Times Square in 1979. Frances M. Ginter/Getty Images

"Stagflation" plagued the economy of the late 1970s and early '80s. Some marketers saw it as an opportunity to pitch brands as pocketbook friendly. Above, New York's Times Square in 1979. Frances M. Ginter/Getty Images
Listen Now

What’s the recipe to beat inflation?

Start by simmering a pound of ground beef. Add one tablespoon of mustard, a cup of sour cream and then the magic ingredient: Bisquick.

Above an illustration of a butter and syrup-drenched pancake was the slogan: “Inflation Presents The Pancake.”

There was also a separate ad: “Inflation Presents The Biscuit.” All the ads had the same tagline: “Bisquick. An idea whose time has come again.”

“What they were essentially saying is, ‘We’ve been your friend all this time,'” said Robert Klara, an editor at Adweek. “You didn’t get the sense the brand was tripping over itself to attach its name to a current event.”

Inflation was a headache for most marketing departments back then, Klara said. Even if your product wasn’t going up in price, the broader economic environment was just kind of a downer — especially during the “stagflation” era of the late 1970s and early ’80s.

But for certain companies, inflation presented an opportunity.

“If you were a brand that was already basing your sales pitch on ‘Hey, we’re pocketbook-friendly,’ inflation was the equivalent of the red carpet tumbling down the steps,” Klara said.

Take this 1979 ad for an up-and-coming retail chain.

Back then, the actual word “inflation” was prominent in lots of ads. But in 2022, it’s less ubiquitous.

“Our customer behaviors are changing. People are stressed,” said William White, Walmart’s chief marketing officer. “And I think by talking and using the word ‘inflation’ and really shining a mirror directly in terms of what people are facing, I’m not sure that’s as effective. You don’t have to hit them over the head with it.”

Some marketers are using the I-word, albeit in more subtle ways than in the 1970s. Wireless network provider Mint Mobile launched a campaign with spokesperson Ryan Reynolds wryly accusing the company’s competitors of using inflation as an excuse to raise prices.

While cleverness and humor can work in marketing around inflation, Adweek editor Klara called it a tightrope for advertisers.

“It’s kind of a dangerous game to play,” he said, “because as soon as you say the word ‘inflation,’ obviously that’s a galvanizing, polarizing, irritating term.”

Federal Reserve Chair Jay Powell may be perfectly fine with the word “inflation” not appearing in every commercial. While there’s no definitive study on the impact of advertising on inflation expectations, everyone saying the word all the time probably wouldn’t help.

“When people expect inflation, if you think you see a bargain, you really grab it, so you start demanding stuff ahead,” said Donald Kohn, who worked at the Federal Reserve in the 1970s and rose to become vice chair of its Board of Governors. “That just adds to the inflation pressure.”