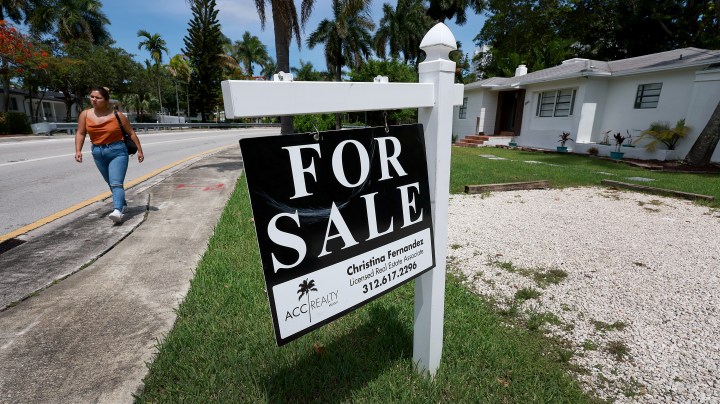 COPY
The median sale price was $407,600 in May, and mortgage rates have climbed. Some would-be buyers are finding the market less affordable, yet sellers have lost some leverage, says Amanda Pohlman of Keller Williams in Cleveland. Joe Raedle/Getty Images

The median sale price was $407,600 in May, and mortgage rates have climbed. Some would-be buyers are finding the market less affordable, yet sellers have lost some leverage, says Amanda Pohlman of Keller Williams in Cleveland. Joe Raedle/Getty Images
Listen Now

The most recent S&P CoreLogic Case-Shiller U.S. National Home Price Index showed that home prices have continued to increase but at a slightly slower pace — “a 20.4% annual gain in April, down from 20.6% in the previous month,” S&P said. And according to the National Association of Realtors, the median home sale price in May was $407,600.

“Marketplace” host Amy Scott checked back in with Amanda Pohlman, a broker at Keller Williams Living in Cleveland, to talk about the state of the real estate market and how buyers and sellers are dealing with current conditions. The following is an edited transcript of their conversation.

Amanda Pohlman: Well, if [prospective buyers] haven’t got exhausted with losing so many homes, there is definitely a reprieve. However, the interest rates are, in some cases, kind of almost pushing them out of the market. So our first-time homebuyers definitely have more of an opportunity to win in multiple-offer situations. And that’s good news. But I think, you know, what the [Federal Reserve] has done with the rates and slowing down inflation has definitely pushed some people out of being able to afford homes.

Amy Scott: And what are you hearing from sellers who may have been hoping to cash out at the top of the market, or at least when prices were very high? Are they starting to lower prices and maybe do a little bit more to try to encourage sales?

Pohlman: Yes, they don’t know necessarily that the market, the top of the market, is behind us. You know, what used to be, let’s say, seven days on the market might now be 21 days on the market. But the opportunity with the realtors is to have that conversation with sellers that it could be longer. So sellers are still a little bit of pie in the sky with what they think they can get from their homes. And that’s going to be a little bit more of a wake-up call for some of them that are priced wrong for this moving and correcting market.

Scott: When I called you up the first time, it was for a story about so-called love letters of people shopping for homes, finding so much competition and trying to set themselves apart by writing, you know, heartfelt letters to the sellers about how great they would be as buyers of this home. And you know, a practice you actually discouraged because of the potential fair housing implications. But I wonder — I mean, this was also happening at a time when people were waiving contingencies, you know, waiving the right to even an inspection to buy a house just because of the competition. Has that eased up a bit?

Pohlman: Oh, I would say it hasn’t yet, but it should. Because yes, we’ve had quite a few months of waiving inspections and covering appraisal gaps. We listed five houses last week, and we’re seeing that the showings are down and the offers are down. So what used to get 12 to 15 offers might now only get one to three offers. So we are definitely seeing a slowdown in the amount of buyers that are looking and bidding on homes. So the love letter situation, the appraisal gaps and the waiving inspections, really I hope is a thing of the past because down the road that could open up a whole can of worms for everyone, when they don’t do inspections or they’re overpaying way more even than the bank thinks it’s worth if they’re using a lender.

Scott: What’s your day-to-day like in this market as there’s kind of a shift? What kind of conversations are you having with your clients?

Pohlman: So with sellers, it’s an expectations conversation. If there’s motivated sellers and same with motivated buyers, if they really have to sell or have to buy, the conversation is just to be smart. And to make sure that if they really do, for example, where the buyer loves a house, that they are at least doing inspections for informational purposes. And if they’re using a lender, that they’re not being kind of too pie in the sky with the appraisal gaps, so that they have some sort of expectation with where they’re going to end up when they finally settle on the price of the house if they’re the winner, and making sure that everyone who’s kind of been exhausted with this market kind of tones it down, and then finding the motivated and the most important people for realtors to be working with. Really, the numbers don’t lie, and we can see as realtors that the market is correcting. And the days on market is going up, price reductions are coming in and it’s opening up for the buyers a little bit more opportunity to get a house and not lose so many times, because that’s been very difficult for a lot of buyers.