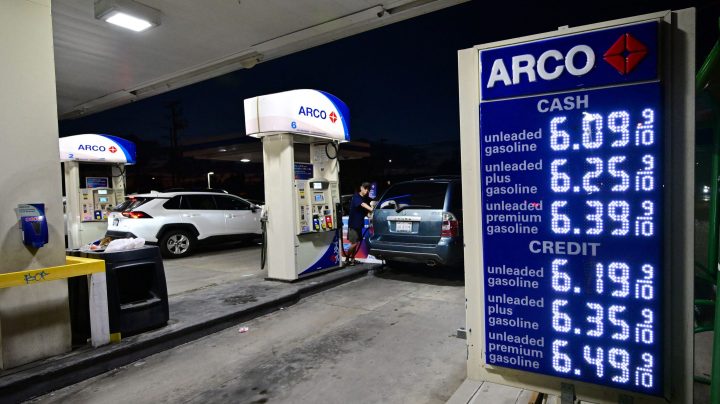 COPY
Most gas stations are owned by individuals who pay to use the oil company's name. Frederic J. Brown/AFP via Getty Images

Most gas stations are owned by individuals who pay to use the oil company's name. Frederic J. Brown/AFP via Getty Images
Listen Now

The national average price for a gallon of gas today is $4.94, according to AAA. Though it’s a little lower than its recent high of more than $5 a gallon, it’s still painful for everyone filling up their tank. Yesterday, President Biden issued an appeal:

“To the companies running gas stations and setting those prices at the pump… Bring down the prices you are charging at the pump to reflect the cost you are paying for the product.”

How much room does a gas station have to do that?

The Shell or Mobil gas stations you drive by aren’t actually owned by Shell or Mobil. They’re not even franchises. They’re owned by individuals who pay oil companies to use their name.

“It’s a one-store operator that has a brand of liquid that that person sells,” explained Jeff Lenard, vice president of industry advocacy for the National Association of Convenience Stores.

And these business owners are the ones who set the price you see when you drive by. Does this mean there’s lots of power for that local entrepreneur? Not exactly.

“There’s really not much a retailer can do to move the price of gas,” Lenard said.

He said gas station owners set prices based on what they’ll pay for their next shipment. Deliveries happen anywhere from multiple times a day to every three days, depending on the station. The owners then add a markup of about 30 cents a gallon.

“Fuel’s a traffic driver,” said Lenard. “It gets people to the pump.”

The truth is, gas stations are really retailers selling you a soda, a lottery ticket or a car wash, according to Dean Foreman, an economist at the American Petroleum Institute.

“It’s often said that they make more money selling coffee than they do gasoline,” he said.

For some businesses, gas actually loses money. Take chain grocery stores and warehouse clubs that might sell gas at a price lower than their competitors.

“The more things you sell, the less important gasoline is to the viability as a business,” Foreman said.

The sellers who might have a little wiggle room to make extra money are stations in rural areas or right off highways. Hugh Daigle, a professor of petroleum engineering at the University of Texas at Austin, said these owners face less competition. So they can up the price, but it’s not all going into their pockets.

“Because the distribution and transportation costs, you know, might be quite expensive,” Daigle said, adding that what’s really driving the cost of gas right now is the price of oil — and our limited capacity to refine it.