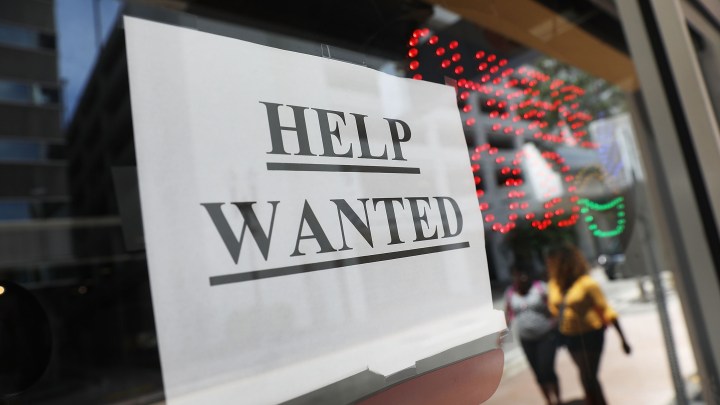 Fighting inflation is really only half of the Federal Reserve’s job. The other part of its dual mandate is maximizing employment. In that regard — to hear Chair Jerome Powell tell the tale — maybe the Fed’s done too good a job. Because the job market right now is very, very good for workers.

But as the chairman put it to Bloomberg back in April: “It’s too hot. … It’s unsustainably hot.” Meaning: The Fed’s prepared to see the job market weaken, at least somewhat, if that’s what it takes to get a handle on inflation.

If you live and breathe labor-market metrics, like economist Julia Pollak at ZipRecruiter, then the current employment picture is “very interesting at the moment — oy — too interesting,” Pollak said.

Unemployment is low and there are two jobs available for every job seeker, but keeping that going is not the Fed’s first priority.

After a long period focused on supporting economic growth, this week, Pollak said, “the Fed changed its tune somewhat and pledged a quote ‘unconditional’ fight against inflation, even at the cost of rising unemployment.”

For now, unemployment’s still really low at 3.6%. But job postings are down at ZipRecruiter, especially in sectors vulnerable to rising interest rates, like real estate, homebuilding and advertising.

Job creation is tapering off. In May it was the lowest in a year. Said economist Dana Peterson at The Conference Board: “We don’t expect to see big increases in payroll employment anymore because we’re pretty much back to where we were before the pandemic.”

“What we’re seeing, it’s like a beautiful summer day with clouds on the horizon,” said Michael Gritton, who runs KentuckianaWorks, the workforce development agency in Metro Louisville.

He said 80 employers showed up to a recent job fair for graduating seniors, including UPS, GE Appliances and Ford. All are still recruiting like mad, but all are watching what the Fed does with interest rates and waiting for a slowdown.

“Everyone can see storm clouds brewing, and they just don’t know how fast they’re going to get here or how bad the storm’s going to be,” Gritton said.

Right now, the Fed predicts the national unemployment rate will reach 4.1% in 2024.