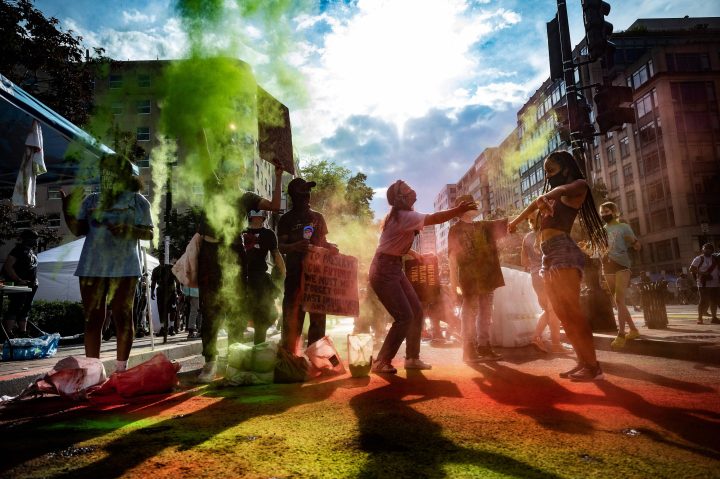 COPY
Demonstrators play in a cloud of washable color powder during a Juneteenth march and rally in Washington, DC, on June 19, 2020. IM WATSON/AFP via Getty Images
Economic Pulse

Demonstrators play in a cloud of washable color powder during a Juneteenth march and rally in Washington, DC, on June 19, 2020. IM WATSON/AFP via Getty Images
Listen Now

Juneteenth is a powerful day in history that celebrates emancipation of enslaved African Americans. But recently, big companies have been criticized for commercializing the holiday.

Companies that want to recognize Juneteenth in a meaningful way need to first audit their internal practices, said Jeanine Poggi, editor of Ad Age. “It’s about much more than just checking a box. It’s where are you placing your investment? Are you investing in these communities outside of the campaign that you’re creating to sell products? Are you thinking about your media spend?” she said.

For Thursday’s Economic Pulse, Marketplace’s David Brancaccio spoke with Poggi about how brands can best honor the holiday. The following is an edited transcript of their conversation.

David Brancaccio: All right. Sunday marks Juneteenth, and this is a national holiday like no other, where more than two years after the Emancipation Proclamation, enslaved people in Texas were informed of their new freedom. And some companies are getting this right. Some companies, high-profile ones, are off in their response to this, and you’ve been watching some of this.

Jeanine Poggi: Yeah. You know, it’s interesting right now, we saw Walmart a few weeks ago attempt to celebrate Juneteenth with a special-edition, private-label ice cream that received a ton of backlash on social media. The retailer, you know, was really facing criticism for trivializing and trying to cash in on an event that commemorates Black people’s emancipation from centuries of slavery. And this commercialization of the holiday really came back to bite them. Essentially because it’s really looking at the strategy in which brands are trying to commemorate something like Juneteenth, and it being more than just a time to, you know, put a logo on a packaged good or come out with a commercial, but really about looking at the brand’s internal practices and how much they are supporting the communities that they’re looking to reach with their marketing.

Brancaccio: Yeah I mean, a key thing with the Walmart issue is that the Juneteenth ice cream seems to have been chosen without consideration of whether it was made by Black-owned suppliers.

Poggi: Exactly. Really thinking about the supply chain and who you’re working with. And who on your team is creating these campaigns? Do you have people of diverse backgrounds who are actually sitting in the rooms thinking about strategizing and planning these campaigns? All of these things factor into whether or not a Juneteenth … or we are at, you know, the middle of June. It is also Pride Month. We see a lot of brands coming out and showing support for the LGBTQ+ community, how they are doing that and in what way they are actually showing support, beyond putting a rainbow logo on packaging or things like that, is really important right now.

Brancaccio: I mean, the advertising that you monitor, I mean, it’s a bit of threading the needle. I mean, companies, I suppose, want to honor these social movements, really, and honor history. But they are also making a buck at some level off of this. And they perhaps don’t want to come off as just making a buck.

Poggi: Absolutely. It’s about much more than just checking a box. It’s where are you placing your investment? Are you investing in these communities outside of the campaign that you’re creating to sell products? Are you thinking about your media spend? Are you investing with diverse-owned and -operated media channels? Where are you reaching these communities? Is it just on, you know, the big TV networks? Or are you thinking about being more strategic and actually shifting some of your ad dollars to diverse-owned media channels? So it’s all of the thinking that goes on behind the scenes that perhaps a consumer might not even see at the end of the day, when you just have a, you know, 15- or 30-second commercial. That’s where the real work lies.

Brancaccio: Yeah, and who’s on staff, who you’ve employed, how diverse your people are. Because if people from a variety of perspectives are in the chain of decision making on something like Juneteenth ice cream, maybe when it’s wrong, the problems will surface rather earlier.

Poggi: Absolutely. And we’re at the two-year mark of when Madison Avenue really started making pledges to help diversify the internal rankings of, like, the ad world, you know, following the murder of George Floyd. We are hitting that time to really see what came of those pledges. At Ad Age, we are spending a lot of time looking at the initial pledges and seeing what has come to fruition and what is still a work in progress. You see, brands like Verizon and McDonald’s recently put out statements about where they are in this progress. McDonald’s is hiring an outside firm to come in and do an audit on its practices. Verizon provided an update on how it’s thinking about media spend. So it is at this point in time, two years in, that we’re beyond the commitment stage and just making the commitment and actually seeing what’s come of them.

Brancaccio: What do you make of that arc of history there? I mean, two years is 24 months, and we’re starting to see some movement. Is that what you’re telling me?

Poggi: I’m saying that it’s time for brands to start showing if there is any movement. I think, you know, some have been a little bit more transparent in the work that they’ve done over the past 24 months, and others maybe have made pledges but haven’t actually said if they were able to uphold those promises that they made two years ago. And now enough time has passed where we need to start seeing those numbers. Seeing who they’re hiring internally. Seeing the supply chain and the suppliers that they’re working with, and it’s, you know, time to see results.

Correction (June 16, 2022): Juneteenth celebrates emancipation, not the formal end of slavery in the United States.