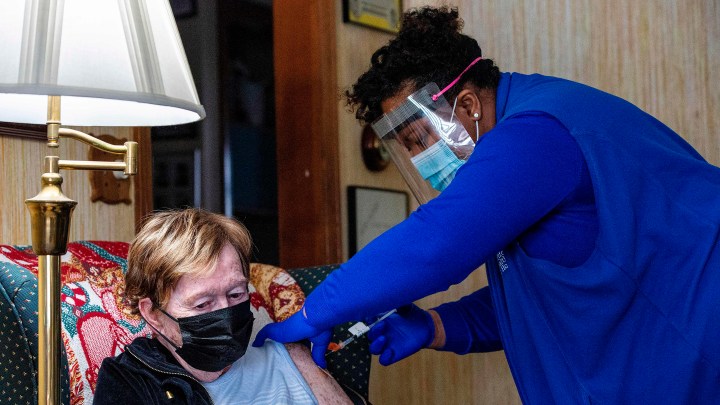 COPY
A registered nurse vaccinates an 83-year-old woman at her home in Manchester, Connecticut, in February 2021. Joseph Prezioso/AFP via Getty Images
COVID-19

A registered nurse vaccinates an 83-year-old woman at her home in Manchester, Connecticut, in February 2021. Joseph Prezioso/AFP via Getty Images
Listen Now

In response to the pandemic, new health care jobs were created. People took on contract jobs to be able to work at test clinics and administer vaccines to community members. And though data is still being collected, The 19th’s economy reporter Chabeli Carrazana says “a majority of the COVID-19 workforce were likely women of color.“

Women workers lead in the health care industry. According to Carrazana’s research, “they are about 92% of medical assistants, 90% of nurses and medical record technicians, 87% of nursing and home health aides, 78% of health practitioner support techs and 74% of medical and clinical lab techs, according to 2015 data from the U.S. Health Resources and Services Administration, the most recent available.”

“Marketplace” host Kai Ryssdal spoke with the Carrazana to talk about women of color in the workforce and what will happen to them now that enormous demand at the pandemic’s peak has died down. The following is an edited transcript of their conversation.

Chabeli Carrazana: A lot of these folks came in to serve an enormous need during the time when, you know, they were coming into these jobs, they were typically higher-paid jobs, they were jobs that they could come into with little experience in public health. But now we’re seeing places winding down. And also these contracts that came in, through the federal government to make these jobs available, are now also ending. And they’re trying to see what happens next.

Carrazana: That’s exactly right. So we were seeing people earning $30 an hour or more, in many cases, through these positions. A lot of women of color also lost their jobs during the pandemic. Also, to begin with, public health is a field that already employs majority women. And you have these folks coming in who are trusted leaders in their community, trusted messengers, have a sense of responsibility and were really effective in this work.

Ryssdal: Can we dig into that “trusted messenger” thing for a minute? Because you have women of color doing the testing and the monitoring, and a lot of the the public health work in a pandemic in which people of color overwhelmingly suffered. And there’s some connection there, and I can’t quite put my finger on it. But that seems to matter.

Carrazana: Absolutely. I mean, to that point of sort of a sense of responsibility, that’s something that really came up when I was talking to workers in this workforce, who had personal experiences with loss during COVID and felt like they could be the ones to, you know, convince someone to get a vaccine or help people get tested or contact trace. And they were doing it out of that sense of responsibility. But we saw it across the country when the first person got vaccinated in every state, right? In almost every single state, the first person to be vaccinated was a woman of color — typically a nurse. They did it to help their own community, you know, have some trust.

Ryssdal: Right, and they did it publicly. I’m sure you spoke to dozens of women for this story. Pick your favorite. Tell me a good story.

Carrazana: Well, one of my favorite stories was about a woman in Texas, who was an immigrant, grew up low-wage, raised by her mother and her grandmother, her mother was a nurse. And she went and started doing this work, as well, working in clinics, trying to get folks vaccinated. Her responsibility was to find areas in Houston where folks were not getting access to the vaccine. She tells the story of an Afghan family that she spoke to, in an apartment complex in Houston, that was all refugees. And they welcomed her into their apartment late at night, eight people to a 600-square-foot apartment. All of them got vaccinated that night, made her a meal, were so thankful. But simply did not have the connections, the understanding, to go seek out this health care themselves until she came to their door. And for her, this was a moment where she said, “You know, this is really why we did this work, for these small success stories.” And so now she is looking at a career working in a shelter with immigrant children, similar to her own background, and she says, “You know, as a woman of color, that is what helped open doors for me when so many were shut, because they trusted me to talk to them directly, from personal experience. And that’s how we got people vaccinated.”