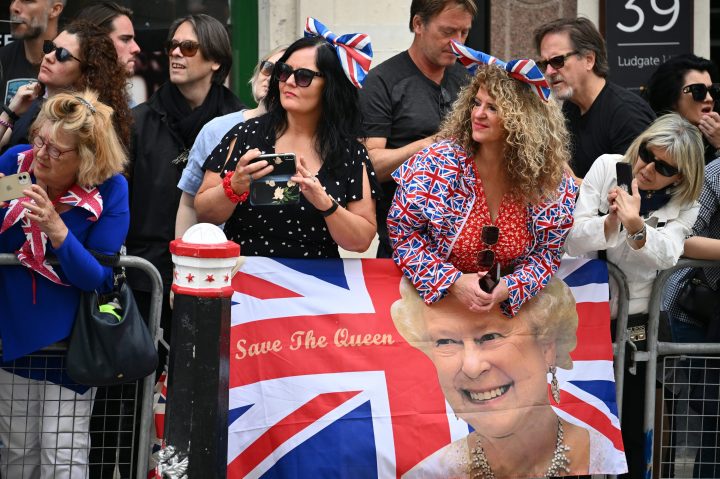 COPY
Members of the public gather outside St Pauls Cathedral on June 03, 2022 in London, England. The Platinum Jubilee of Elizabeth II is being celebrated from June 2 to June 5, 2022, in the UK and Commonwealth to mark the 70th anniversary of the accession of Queen Elizabeth II on 6 February 1952. Jeff J Mitchell/Getty Images

Members of the public gather outside St Pauls Cathedral on June 03, 2022 in London, England. The Platinum Jubilee of Elizabeth II is being celebrated from June 2 to June 5, 2022, in the UK and Commonwealth to mark the 70th anniversary of the accession of Queen Elizabeth II on 6 February 1952. Jeff J Mitchell/Getty Images
Listen Now

Platinum Jubilee celebrations marking Queen Elizabeth II’s 70 years on the throne will continue through the weekend across the U.K. And street parties are an essential, British tradition punctuating the festivities.

Similar to block parties or tailgates in the U.S., street parties are designed to bring communities together. But these are on a scale all their own.

“We’re really lucky because our local council have given us a grant – £1,500 ($1,800) – to go toward equipment and entertainment and things like that,” said Krissi Clarfelt, who’s planning a street party for her street in Northwest London.

“In terms of food, we’re hoping people will bring food from their culture and we’re going to have a great feast on the central stretch of tables going down the street. And we’d also like to do this traditional afternoon tea.”

She and her planning committee have been at work for months. One of her first orders of business was sourcing bunting. The festive triangular flags strung up between trees and streetlights have become an absolute staple of celebrations like these.

Chloe Flaherty, the business manager at British Made Gifts, which has created a whole line of jubilee-themed bunting, said they’ve sold around 1,200 units.

“They’re three meters long. They’ve got 15 panels and each panel is a different design: The queen, the emblem, the dates. We’ve seen people ordering just one unit, or some businesses order 15 or 100 at a time,” she explained, adding that online sales have boomed this jubilee. She’s even seen her bunting tied up on fences or street signs on TV coverage of the jubilee festivities.

How and where to source such street-party supplies has been a common question for first-time organizers. And that’s where U.K. charity the Eden Project has provided a helping hand. It put together online guides including invitation templates, recipes, and tips to getting started – which have been downloaded 72,000 times.

“We also have been sending out bunting and tea towels and bits and pieces that can make their event go with a bit of a bang,” said program director Lindsey Brummitt.

The Eden Project has been coordinating what’s been dubbed the Big Jubilee Lunch. Funded by the National Lottery, it’s an event that’s part of the official slate of celebrations for the Platinum Jubilee.

“The longest one in the U.K. is probably going to be 2.5km in Morecambe. We’ve got a world record attempt for one in Preston. So there’s loads of things going on,” Brummitt said.

But, she emphasized street parties don’t have to be expensive, carefully coordinated blowout bashes. They can be small gatherings in back yards or picnics in the park – the whole point is to build community spirit.

“The essence of the Big Lunch is inclusive and the fact that it’s right on your doorstep means it’s for everybody. We have years of data showing the positive impacts of what bringing people together can do and I guess food is a great leveler, it’s something we can all share and enjoy,” she said, noting that some communities also use their lunches as an opportunity to fund-raise, and on average, more than $10 million is put toward causes that matter to local communities each year.

Clarfelt said the jubilee street-party planning has, indeed, brought her street closer together.

“It’s been great to actually meet people, spend time with them, and really understand what they’re about. And it’s been lovely to see how enthusiastic people are about an event like this. It’s just very encouraging, and positive really, especially after the last couple of years,” she said.

Like jubilees past, this one is an opportunity – everyone can agree – to stash away phones and tablets, gather round the table, maybe clink a glass of fizz or two, and have an excuse to just have a party.