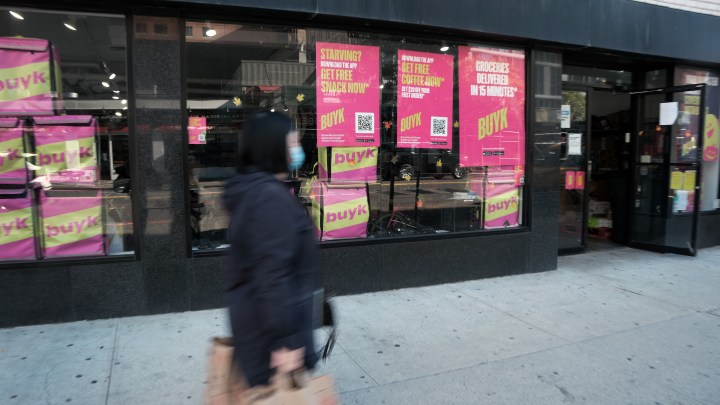 One of the darlings of the early pandemic days, when people were too scared to leave their homes, was grocery delivery. Now, its future looks a little cloudy.

The number of Amazon Prime members who buy groceries on the site is trending down, according to data from Coresight Research. And a bunch of those ultrafast delivery startups recently filed for bankruptcy. Meanwhile, Instacart plans to go public.

Grocery shopping was kind of a defining thing in the early days of the pandemic. There was the panic buying and the stockpiling and setting the alarm for 2 a.m. to get a delivery slot.

Shopping trips became special because they marked the passage of time. In short, everything about shopping changed, said Arun Sundaram, a retail analyst at CFRA Research. “And no retailer was really prepared for that, to be honest.”

Especially on the delivery side. So, big grocers partnered with apps that were already equipped to get stuff to customers quickly.

“And now that online grocery shopping is slowing down a little bit, they have a little more time to build out their own infrastructure,” Sundaram said.

It’s why we’re seeing an industry shakeup. Walmart, the largest grocery chain, is expanding its in-home delivery service. Meanwhile, Instacart has slashed its valuation by almost 40%.

A plus for grocery delivery: Some of the early pandemic behaviors have stuck. People are still eating at home more and grocery orders are still large, according to Bobby Gibbs, a consumer goods analyst at OliverWyman.

But even though some people have taken to buying milk and bread online, many are going back to stores in person. They feel safe again and are worried about inflation.

“How do consumers think about the extra cost of delivery as they become more price-sensitive?” Gibbs said.

“If we don’t have one of the products you need for your dinner tonight, chances are you won’t order from us,” said Adam Wacenske, the U.S. head of operations at Gorillas.

Because if you have to run to the store for taco shells, what’s the point of ultrafast delivery? 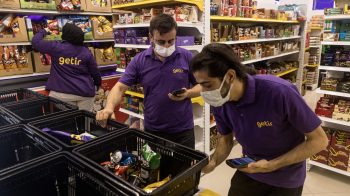