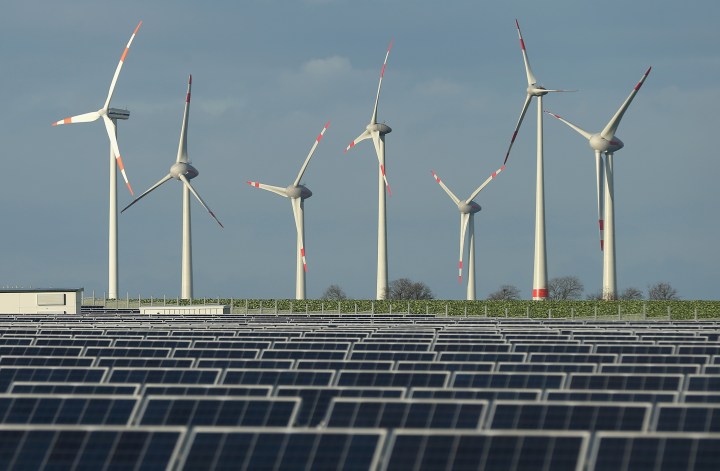 Andy Uhler, Rose Conlon, and Meredith Garretson May 30, 2022
Heard on:

Andy Uhler, Rose Conlon, and Meredith Garretson May 30, 2022
Heard on:

It’s been more than six years since the Paris climate accord was adopted and 196 countries agreed to limiting global warming and work toward a climate neutral world. But the sobering warnings about climate change have continued, along with political gridlock on how to proceed.

“As an atmospheric scientist and environmental engineer, I focus most on technologies — that’s what we think about most of what we need to be able to clean up electricity, what we need for cleaner cars,” he said in an interview with Marketplace’s Andy Uhler.

“But those aren’t going to make it to market and those aren’t going to help cool the climate unless there are policies that get those to be deployed domestically. And what we do domestically isn’t enough because we’re only one-seventh of the world’s [carbon] emissions, so we need diplomacy to take what we do here in the U.S. and make sure that that starts being applied in other parts of the world as well.”

Andy Uhler: You compartmentalize into basically three different buckets that we need to focus on. Break those down for me. There are three ways we can think about getting out of this gridlock that is the discussion about climate change, right?

Daniel Cohan: Right. So as an atmospheric scientist and environmental engineer, I focus most on technologies — that’s what we think about most of what we need to be able to clean up electricity, what we need for cleaner cars. But those aren’t going to make it to market and those aren’t going to help cool the climate unless there are policies that get those to be deployed domestically. And what we do domestically isn’t enough because we’re only one-seventh of the world’s [carbon] emissions, so we need diplomacy to take what we do here in the U.S. and make sure that that starts being applied in other parts of the world as well.

Uhler: Now, when we talk about “clean power” or “clean energy,” it’s pretty buzzy. But what does that mean for the average person? How do we think about clean energy?

Cohan: Well, none of us want to think about electricity too much — even here in Texas, where we’ve had our problems with the grid. So we want electricity to keep working for us reliably and affordably, but to start coming from cleaner sources —from wind or solar or nuclear or maybe geothermal someday, rather than from the coal and natural gas that have been dominating the grid for decades. And so what we need is a transition that replaces those dirtier fuels with clean ones while still doing everything that we need electricity to do, and actually doing more in the future as we start to electrify our cars and electrify more heating and industry.

Uhler: And that’s where a lot of diplomacy and policy comes in, I imagine, because you have an entrenched industry that’s going to push back against exactly that.

Cohan: Right. There’s a huge amount of coal and natural gas to get used for electricity now, and the demand for those fuels will decline as we’re able to shift to cleaner fuels for producing electricity.

Uhler: I’ve been thinking about this a lot — whether or not there’s an adversarial relationship between things like geoengineering and this sort of adaptation that a lot of folks in this space talk about, and mitigation. What do you think? Can the two work together? And it seems like inherently they have to, right?

Cohan: Right. We’re going to have to adapt to a warmer climate because even if we do everything possible, we’re still going to be living in a warming climate. And so we’re going to need to adapt to stronger heat waves and droughts and stronger hurricanes, more flooding. But it needs not to be seen in opposition. We need to do both — we need to both adapt and we need to mitigate. We need to move to clean energy; we need to reduce our emissions so that warming doesn’t happen so quickly.

Uhler: Something you and I’ve talked about before is that the atmosphere, the Earth, doesn’t care where molecules of carbon come from. At the same time, you single out the United States as a country that plays and can play and should play a pivotal role in combating climate change. What makes us unique to be able to do this?

Cohan: The U.S. is absolutely pivotal to addressing climate change. Some people point out that we’re no longer No. 1 in emissions because China has surpassed us, but we’re a pretty big No. 2. We’re historically responsible for more emissions. We emit more per person than almost anyone else. And what really makes us pivotal is we’re still the largest economy. So the choices we make about the goods that we purchase, about the rules that we set for international trade — a lot of that dictates what ends up being manufactured in other countries, the rules that other countries adopt. And one thing that I really looked at as I was looking at the diplomacy is there are other countries that have more ambitious climate policies. The European Union has a much more robust carbon emissions market and huge costs that they impose on industries for their emissions, but they usually don’t ensure that those policies carry beyond their borders. Whereas what the United States really gets right is being reciprocal, saying if we start acting on this, when we do something, we usually insist that our trading partners go along as well. You even hear in Congress talk about if we ever did have a carbon tax, being sure it got applied as tariffs on goods that got brought in. And so that’s what really makes us pivotal is if the U.S. ever did act — and we haven’t acted nearly enough in terms of climate policy yet — but if we did, I think we’d be much more likely to bring followers along with us than, than what Europeans and others have achieved.

Uhler: There’s a great little story at the beginning of the book where you talk about in middle school you got fascinated with this idea. What happened?

Cohan: Yeah, I guess in some ways you could see this book as an extension of my seventh-grade project for Mrs. Dixon. To age myself, I was going through middle school just as James Hansen, the famous NASA scientist, testified before Congress and said global warming is real and we’re causing it. And he had the added impetus that he was testifying during the hottest summer in Washington, D.C., history in 1988. And I don’t think it would rank even in the top dozen hottest summers anymore, we’ve warmed up so quickly. But remarkable how the understanding we have of climate change and what’s causing it is really, mostly the same as where we were in the 1980s. But the tools we have to solve it have changed dramatically. Solar has plunged by 90% in cost. Wind has plunged by 80% just in the past 11 or 12 years. So the solutions that we can move towards are very different than they were back then.

Uhler: Should we be focusing on existing technology? Should we concentrate on building new, cleaner tech? Is there maybe a middle ground?

Cohan: Things like wind and solar power really can already out-compete dirtier forms of electricity, and we just need to build more of them quickly. We’re not adding them fast enough. There are other technologies where we really need a big breakthrough. We don’t yet have affordable enough heat pumps. We don’t yet have a next-generation nuclear technology that’s cheap enough, if we ever will. Geothermal is really at the cusp of becoming something that I think could really take off. What I also see, though, is that what carries those cutting-edge technologies to the cheaper cost can’t just happen in the lab. We need policies that pull those into the market, that get them adopted more — because if we can adopt them while they’re at that edge, while they’re not quite cheap enough, that can drive the economies of scale. That can drive what technologists call learning by doing. And as you do things more and more, the costs have come down. And so we need to take that learning by doing that made solar cheap, and we need to repeat that for geothermal, for clean hydrogen, for so many other technologies as well.

Uhler: So much of this book is about solutions. One thing you talk about a bunch is small-scale actions. And I think that dovetails from exactly what you were talking about, sort of industry bringing these ideas and these innovations to just normal people. There are actions that folks can take that actually do make a difference, right?

Cohan: Right. So there’s always that debate between individual action and policy, but policies really work by people adopting those technologies and buying them. And sometimes those early adopters are what’s needed to make things affordable. So whether it’s buying the electric cars and helping to bring down those costs, or whether it’s companies like Google that have decided they’re going to start buying geothermal electricity even before it’s quite as cheap as wind and solar because they want round-the-clock clean electricity. Those early movers, whether it’s people or businesses or local governments, can really create a market and help drive things to the point where they become more affordable for everyone else.