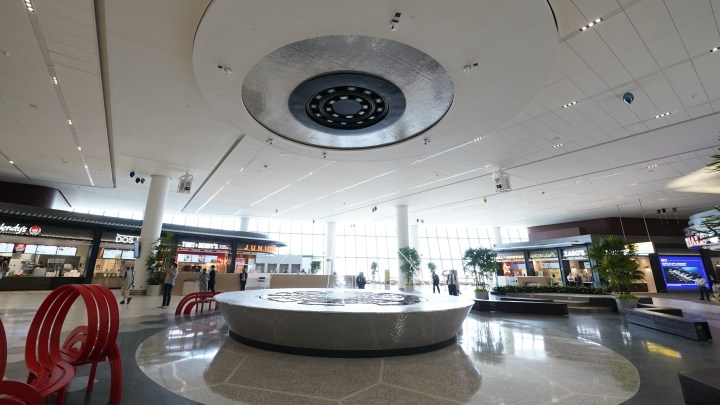 COPY
The water fountain in Terminal B at LaGuardia Airport reportedly cost $1 million and puts on a show with lights and music every 15 minutes. Timothy A. Clary/AFP via Getty Images

The water fountain in Terminal B at LaGuardia Airport reportedly cost $1 million and puts on a show with lights and music every 15 minutes. Timothy A. Clary/AFP via Getty Images
Listen Now

After going through security at the new Terminal B at LaGuardia Airport, the first thing you see is a huge fountain. Every 15 minutes, it puts on a show, with music, lights and water falling from the ceiling in a pattern that spells out the five boroughs. A bunch of travelers are standing in front of it — and, of course, filming it.

“Well, that’s what we aspire to. We want Instagram moments, we want people to actually feel that the experience is something that’s been positive,” said Rick Cotton, the executive director of the Port Authority of New York and New Jersey, which operates the airport.

The fountain reportedly cost $1 million dollars — a pretty penny that’s paying off. Last year, LaGuardia won UNESCO’s prize for best new airport in the world. This is LaGuardia we’re talking about: The airport that used to rank last on passenger satisfaction surveys. The airport that Joe Biden, when he was vice president, once controversially likened to a “third-world country.”

Cotton said a big focus of the new LaGuardia is customer experience.

“You want people, first of all, to feel more relaxed, to enjoy themselves,” he said. “And, to the extent they do that, they do more shopping. And that’s a plus from the point of view of the business side of operating the terminal.”

Airports haven’t traditionally been inspired spaces. You get in, you wait in line, you get your overpriced coffee and hopefully you get out on time. But a bunch of major airports across the U.S. have recently undergone or are almost done with renovations — just in time for summer travel season, which is supposed to be big this year, with more people vaccinated, more countries relaxing travel restrictions and plenty of pent up demand.

Projects in Los Angeles, Seattle and Salt Lake City include features like new runways and technology. But a big focus in recent years has been new terminal designs.

“I think that there’s been more of a design focus and a focus on making airports places people, at best, or at worst, don’t mind spending time. And that’s really big money for these airports,” said David Slotnick at travel website The Points Guy.

A nice terminal might encourage passengers to arrive earlier or choose an airport for a layover. At the very least, it can help calm anxious travelers. And all that encourages them to spend more money. According to Slotnick, about 40% of airport revenue comes from passenger spending on things like food and shopping.

That makes remodeling airport terminals a no-brainer. But actually working out the details of it? “It’s complicated because there are just so many stakeholders here,” Slotnick said.

Think about all the different entities that coexist in airports. They’re owned by cities or states, but the federal government regulates and sometimes subsidizes them. There’s the FAA, the TSA and then, of course, the airlines.

“There were times during the negotiations where we were ready to walk away, because economically it didn’t make sense if we couldn’t figure out some solutions to some of the obstacles that were being presented,” said Ryan Marzullo at Delta Air Lines, who is overseeing the construction of LaGuardia’s new Terminal C, which opens early June.

Delta is covering the majority of Terminal C’s $4 billion price tag. It means Delta led the project, not the Port Authority, which is unusual. Still, both sides of the equation needed each other. Port Authority admits financing the project would have been tough without Delta. And Delta needs LaGuardia to beef up its presence in the nation’s largest city; New York is one of Delta’s major hubs.

“At the end of the day, the aviation business is a competitive environment. And so we’re big on our brand and that goes from not only the aircraft and the flight crew, but also at your ground experience,” said Marzullo.

But airports that have a market monopoly are investing in new spaces, too. Denver International Airport is the third busiest airport in the country by passenger volume, with few other big airports in the region. And it’s already known for its design, with white roof top tents that mimic the Rocky Mountains in the distance. Still, it’s getting a $1.5 billion makeover.

“Denver International Airport is the gateway to the Rockies. And you know, we’re all kinda working for the Chamber of Commerce unofficially, right?” said Stuart Williams, senior vice president of airport expansion.

Because an airport’s impact extends way beyond its walls.