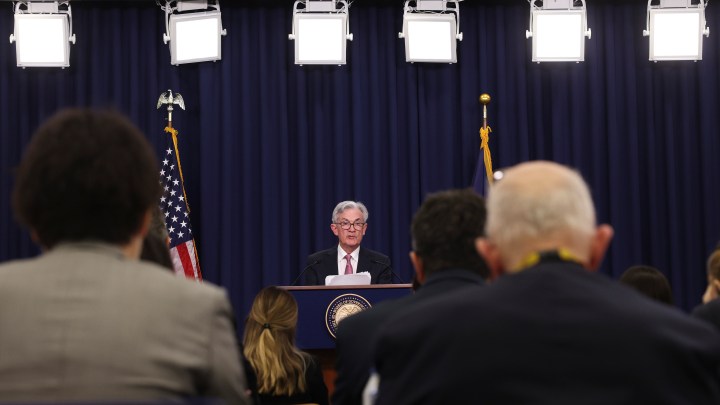 COPY
Fed Chair Jerome Powell at a news conference following the Federal Open Market Committee meeting on May 4. We'll get the minutes for that meeting Wednesday afternoon. Get your coffee ready. Win McNamee/Getty Images

Fed Chair Jerome Powell at a news conference following the Federal Open Market Committee meeting on May 4. We'll get the minutes for that meeting Wednesday afternoon. Get your coffee ready. Win McNamee/Getty Images
Listen Now

Remember the first week of this month? May 3 and 4, to be exact? Those are the dates that the Federal Open Market Committee met to talk about what to do about this whole inflation thing.

Even if you don’t remember the meeting, if you listen to this program, you probably remember what they voted for: a half-percentage-point hike in interest rates aimed at cooling down the economy and, with it, price growth.

Why bring up such ancient news? Well, on Wednesday at 2 p.m. Eastern time, we get the minutes from that meeting. Filled with economic jargon, Fed minutes may not be good book club fodder, but they’re worth paying attention to.

Three weeks after the open market committee meeting, the Fed releases the minutes. Since those minutes come out in the afternoon East Coast time, Quincy Krosby at LPL Financial sometimes has to have an awkward conversation with Dunkin’ employees.

“You’ve got to explain to them that fresh coffee is better than coffee that’s sitting there for an hour,” Krosby said.

Because she said the Fed minutes — a summary of the conversation, not the actual dialogue — are best paired with stimulants.

Here’s a reading: “‘In their assessment of the monetary policy stance necessary for achieving the committee’s maximum employment and price stability goals, members agree that with appropriate firming in the stance of monetary policy … ‘” Krosby said.

A summer beach read it’s not, but Fed minutes are deliberately written that way, according to Peter Conti-Brown at the University of Pennsylvania’s Wharton School. It’s kind of a codebook.

“If you know the code, then it’s going to yield some insights, and if you don’t, it looks like you’re watching a James Bond movie and the spies are speaking to each other in a language that they intend for you not to understand,” he said.

Fed watchers are often scouring for clues that the committee consensus is more fragile than Chair Jay Powell lets on. Maybe some members want to raise rates faster or slower or see inflation as more of a supply chain issue than too much demand.

“Are we getting any kind of hint about big fissures and big fractures in the consensus that will tell us in the next few meetings we’re going to see some zigs and zags?” Conti-Brown said.

The minutes don’t indicate who said what, which may feel antiquated in the era of live-tweeting and livestreaming. But there’s a reason the Fed doesn’t just immediately post the actual transcript, said Bill English with the Yale School of Management.

“Then, the meeting would become less of a serious meeting where people are learning from each and potentially changing their mind,” he said.

The full transcripts do eventually come out — five years after the meeting.