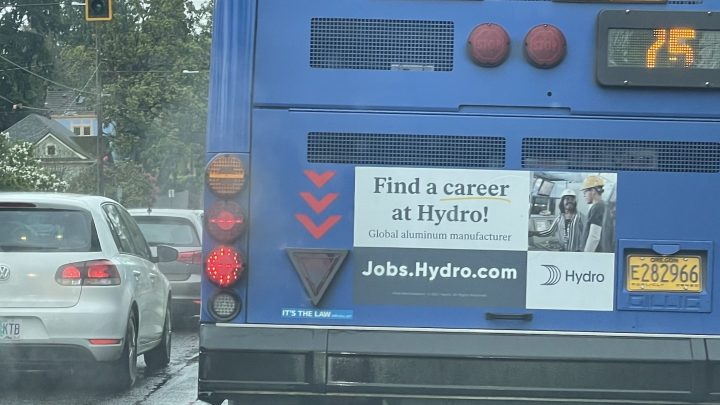 COPY
A company seeking aluminum workers posted an ad on a bus in Portland, Oregon. The private sector has been able to raise wages and hire people faster than the public sector. Mitchell Hartman/Marketplace

A company seeking aluminum workers posted an ad on a bus in Portland, Oregon. The private sector has been able to raise wages and hire people faster than the public sector. Mitchell Hartman/Marketplace
Listen Now

Just two years after the COVID-19 pandemic devastated the economy and more than 20 million workers were laid off, jobs have nearly recovered. The national unemployment rate is at 3.6%, and the total number of jobs on employer payrolls has bounced back to within 1% of pre-pandemic levels, a gap of about 1.2 million, according to the April jobs report from the Bureau of Labor Statistics.

Drill down and you’ll see that employment is ahead of where it was in February 2020 in many sectors: business and professional services, transportation and warehousing, finance, mining and drilling, even retail.

But some sectors are still struggling to fully recover — health care, child care and K-12 education, which offer jobs that have to be done in person and don’t pay very well.

There’s a growing jobs recovery gap between private employers that can raise wages fast in response to the tight labor market and government employers, which mostly can’t.

“The private sector has recovered more than 90% of the jobs lost in the pandemic, the public sector only around 60%,” according to Julia Pollak, chief economist at ZipRecruiter.

She pointed to state and local education jobs, like bus drivers, cafeteria workers and especially teachers.

“Our schools particularly have failed to recover. Lots of teachers have retired, and schools are not figuring out a way to get them back in,” she said.

One big reason, she said, is wages. They’re growing twice as fast in the private sector, and wage growth has lagged in the more heavily unionized public sector.

“Unionized workers, when they come back to the negotiating table, are going to demand large cost-of-living increases and more — because their working environment has been so tough in recent years,” she said.

That’s also holding back nursing-care facilities, according to Hayley Brown at the Center for Economic and Policy Research. “They’re still over 200,000 workers short of February of 2020,” she said.

Those jobs are stressful and risky, and workers earn low incomes.

“The pandemic was really hard on those who work in nursing care facilities, and it’s difficult for them to compete for workers in a tight labor market and raise wages as needed,” Brown said.

According to Brown, child care center employment is down by more than 100,000 jobs, and that makes things difficult for families and other industries.

“We want people to have jobs in child care, but also because the child care industry is essential for mothers’ labor force participation specifically to come back to pre-pandemic levels,” she said.

In fact, pretty much wherever you look in the economy, it’s hardest to fill the lowest-paid jobs.

Becky Frankiewicz, president of the staffing firm ManpowerGroup, said that for $13 or $15 an hour, workers aren’t sticking around.

“You really don’t see the quit rate start to fall until you hit about $17 an hour,” she said. Workers want higher pay and more flexibility to set their schedules or work remotely, according to Frankiewicz.