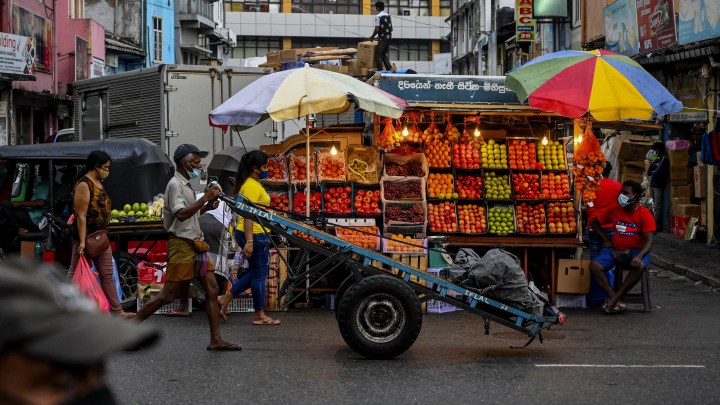 COPY
Above, a fruit vendor waits for customers in Colombo, Sri Lanka. Higher import prices for foods are putting pressure on the currencies of developing countries, including Sri Lanka. Ishara S. Kodikara/AFP via Getty Images

Above, a fruit vendor waits for customers in Colombo, Sri Lanka. Higher import prices for foods are putting pressure on the currencies of developing countries, including Sri Lanka. Ishara S. Kodikara/AFP via Getty Images
Listen Now

Developing nations are accumulating a lot of foreign debt, with low-income countries like Sri Lanka, Tunisia and Ghana teetering into riskier territory because of the war in Ukraine. Higher rates for borrowing money — along with increased food and energy prices — are making financing even more difficult for nations that are already poor.

“Marketplace Morning Report” host Sabri Ben-Achour spoke with William Jackson, chief emerging markets economist at Capital Economics, about how the war Ukraine is impacting many developing countries. The following is an editing transcript of their conversation.

Sabri Ben-Achour: First, kind of help us all understand the connection between the war in Ukraine and emerging markets.

William Jackson: Yeah, the war in Ukraine is having a lot of spillovers to the rest of the world, and some emerging markets are particularly vulnerable to the spillovers. One, and perhaps the most obvious, is that we’ve seen a big rise in commodity prices, particularly oil, but also food prices. And for countries that are very dependent on imports of these goods, that’s raising the cost of their imports. That’s meaning they need more hard currency to be able to finance that. That’s putting pressure on their currencies.

Ben-Achour: If these countries, you know, they’re low- or moderate-income, they suddenly need to spend a lot more on basic materials. How does that affect their currency?

Jackson: Essentially, they’re facing a higher import cost. So, the importer needs to exchange the local currency, generally, for U.S. dollars. That means that the demand for their own currency is weakening, and so the price of their currency weakens too, and it means the imported price rises as a result. So we see currency depreciation emerging from these rising import bills.

Ben-Achour: So if their currencies are devaluing, that has an implication for the debts that they owe internationally. Can you explain that for us?

Jackson: For many of these economies, they have been borrowing quite heavily in U.S. dollars or in euros rather than in their own currency. The problem, of course, is that they are then exposed to currency risk. So if its own currency weakens, then essentially the cost for the government of servicing its debt increases too. So the weaker the currency, the bigger that cost of servicing debt becomes.

Ben-Achour: I mean, is there any recourse for these countries when they run into these kinds of problems? I mean, can they go to the IMF [International Monetary Fund] or some other body?

Jackson: Sometimes countries have turned to China, where often the lending comes with few strings attached, but it also involves maybe providing China with some leverage over the country. And the IMF is clearly an option and seems to be the way Sri Lanka in particular is turning right at the moment. The IMF will lend to these countries, but there comes with [that] a whole program that is designed to restore sustainability to the economy. But often this is quite bitter medicine to swallow in the short term.