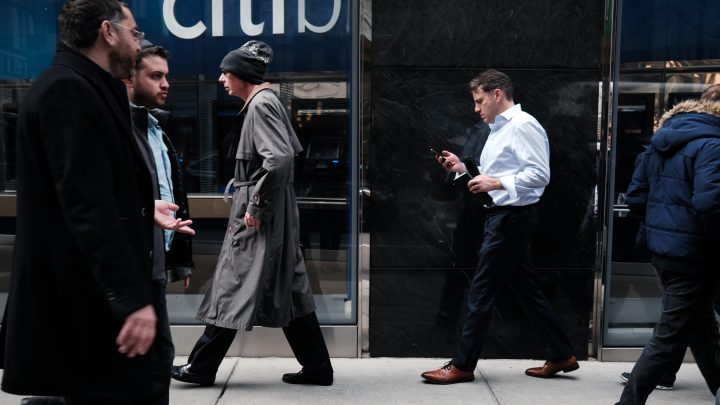 COPY
The data on recent filings for jobless benefits compares favorably with pre-pandemic levels, but nearly 2 million people were working before the pandemic who aren’t now. Spencer Platt/Getty Images

The data on recent filings for jobless benefits compares favorably with pre-pandemic levels, but nearly 2 million people were working before the pandemic who aren’t now. Spencer Platt/Getty Images
Listen Now

​But in the week that ended April 16 of this year? Only 184,000 Americans filed for unemployment, according to the Labor Department. And that’s even high by recent standards: The four-week average is a little over 177,000.

Even before the pandemic, it was rare for first-time jobless claims to fall consistently below 200,000 week after week. But that’s where we are, according to Andrew Stettner, senior fellow at the Century Foundation.

“It’s absolutely great news that workers are not being forced to apply for unemployment benefits. The job market is strong. People are very confident about their ability to find a job quickly if they lose a job,” Stettner said.

But not many workers are losing their jobs, according to Andy Challenger, senior vice president at outplacement firm Challenger, Gray & Christmas.

“Layoffs are at historic lows. Near-record highs in job openings across the country. Employers are hanging on to their employees at any cost,” Challenger said.

“There’s just intense competition for those workers willing to come in and work in-person jobs, and so companies are poaching them back and forth from each other,” he said.

Nearly 2 million people were working before the pandemic who aren’t now. That includes a lot of parents, especially mothers of young children.

One reason they’re on the sidelines: There aren’t enough child care slots or enough teachers.

“It’s an issue of competition — you know, Starbucks, Target, places like that are able to offer $15 an hour, $17 an hour, tuition, benefits,” she said.

There is a risk that this whole “tight-labor-market-low-unemployment” situation could unravel, according Richard Wahlquist, president of the American Staffing Association.

“We’re in a completely uncharted territory, both in terms of fiscal-monetary policy and then the geopolitical issues,” Wahlquist said.

But so far, he said, consumer demand and employer demand for workers show no sign of slowing down.