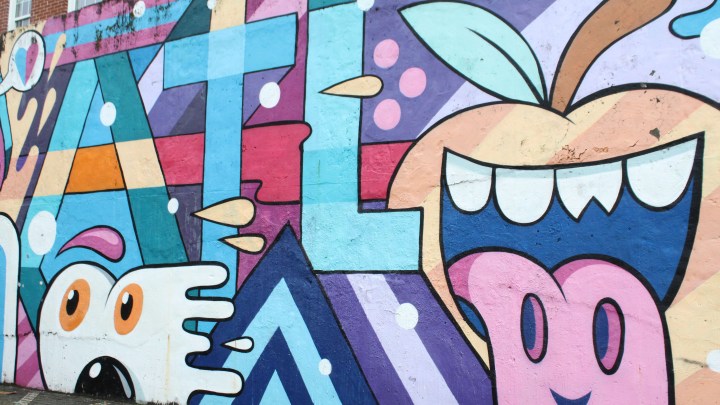 COPY
A mural in Atlanta’s Old Fourth Ward neighborhood features the work of visual artist Greg Mike. Over the last year, Mike has minted several collections of his artwork as NFTs. Emil Moffatt

Atlanta muralist Greg Mike recalls the first time he heard the phrase “minting.” It was at a bitcoin conference in San Francisco four years ago.

“We were painting a giant mural and it was painted live throughout the course of the event, and people kept coming up to me and they kept saying, ‘Hey are you gonna mint this thing?’” Mike said. “And at that time, I had no idea what ‘minting’ meant.”

So, he began doing his research and early last year he minted, or created, his first non-fungible tokens. The NFTs were a series of animated digital creations in his retro-cartoon style filled with bright colors and bold lines.

NFTs are growing in popularity with some up-and-coming visual artists. They see it as a way to connect directly with their followers and create another revenue stream. But those artists are also still trying to navigate the complexities of this new technology.

Mike said his NFTs have sold for thousands of dollars, and that NFTs have made him rethink the value of his artwork.

“The digital files that I’m creating are actually the originals and my paintings that I’m painting, whether it’s a mural or a painting in the studios, it’s almost a replica,” Mike said.

Other artists are using NFTs as digital tickets for VIP access, meetups or exclusive content. NFTs are a way artists can bypass the traditional channels of reaching customers, such as art galleries. And that can be helpful to artists of color or people who lack the funds to support their artistic work.

“It’s cutting out the middleman and allowing them to build stronger relationships with their community,” said Ashley France, who runs a consulting firm in Atlanta that helps artists.

But some artists are hesitant to get involved with NFTs until the energy-intensive blockchain processes behind them have a smaller carbon footprint.

These technologies have to become more efficient, said Benn Konsynski, a business professor at Emory University in Atlanta.

“They’re intended to create a trustable process, but by so doing, they create negative impact on energy consumption,” he said.

The NFT space also can raise legal issues. Artists have to be careful about navigating intellectual property laws, France said.

“You know, as artists do, they take things and make it their own but not realizing that it doesn’t matter if you’re being creative about it or that it’s an NFT,” she said.

Because she said, even if it’s part of an NFT, it can still infringe on someone else’s work.