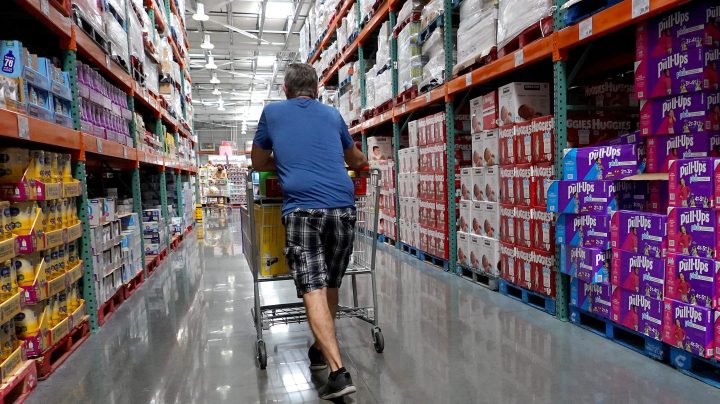 COPY
Food prices are climbing, and more people are turning to bulk stores for their needs. Joe Raedle/Getty Images

Food prices are climbing, and more people are turning to bulk stores for their needs. Joe Raedle/Getty Images
Listen Now

Breakfast cereal prices are up 9% since last year. Coffee is up 11%, and bacon is up 18%. Unfortunately, there is no Strategic Bacon Reserve that President Joe Biden can tap into. In previous inflationary periods, consumers have turned to a tried-and-true tactic to deal with escalating food costs: bulk purchases.

Jessica Sanchez never considered herself a Costco person, but now, every time she opens her refrigerator, she gets a reminder that her shopping identity is evolving.

“Now I have like six bottles of kombucha in my fridge that I still haven’t drank,” Sanchez said. She used to shop mostly at regular supermarkets with her two kids in tow.

“It’s tough when it’s like an extra $100 a week that you’re spending on groceries,” she said. Expecting that to continue, she bought a Costco membership in January and started buying some things in bulk.

According to Scott Baker at Northwestern University’s Kellogg School of Management, that’s how basic economic theory works, especially in times like these.

“They basically want to bring those purchases forward to the present, when prices are lower, versus waiting to purchase those goods in the future, when they think prices are going to be much higher,” he said.

“Over the past two years, about 13% increase in their membership rates and when they gain new members, they tend to stay,” Sundaram said.

He said the pandemic has also loosened a key bulk-buying constraint for many families. “A lot of people we saw move from more urban environments to the suburbs. That in turn allows you to have more storage space.”

But even if you have room in the new garage, you probably don’t want to store eggs and milk there.

Though she buys less at the regular supermarket than she used to, Sanchez still shops there for more perishable items.

And there are other benefits to the regular supermarket. “You get points when you grocery shop for fuel,” she said. She would get gas at Costco, but nowadays the line is just way too long.