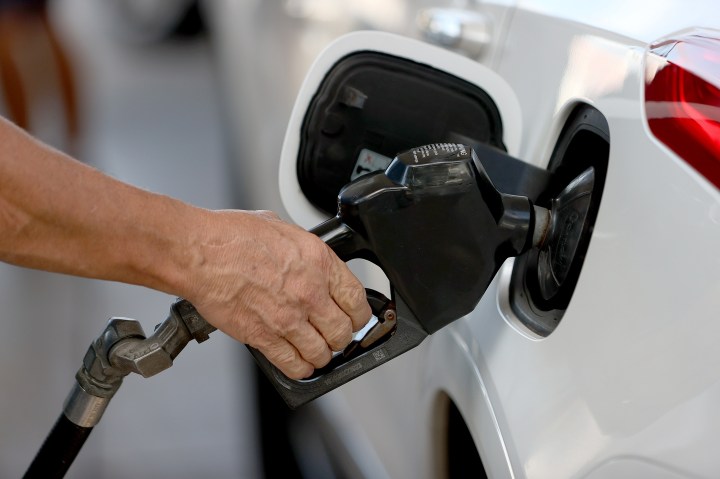 Many Americans react to a big, round number like $4 a gallon. “You don't hear a whole lot of commentary about ‘Gas prices just broke $3.96,’” a marketing expert said. Joe Raedle/Getty Images

Many Americans react to a big, round number like $4 a gallon. “You don't hear a whole lot of commentary about ‘Gas prices just broke $3.96,’” a marketing expert said. Joe Raedle/Getty Images

Gasoline prices set records in March, with the national average topping $4 a gallon for the first time since 2008.

At one point, the price reached $4.33 — the highest number ever, not adjusted for inflation — before climbing down to the current average of $4.24, according to AAA.

The price at the pump, already on the rise due to supply chain issues, increased after Russia’s invasion of Ukraine and President Joe Biden’s subsequent ban on oil imports from Russia.

A recent survey from AAA found that 59% of Americans say they would change their driving habits or lifestyle if gas prices reached $4 a gallon, while 75% would if the cost topped $5.

“You don’t hear a whole lot of commentary about ‘Gas prices just broke $3.96,’” explained Akshay Rao, a marketing professor at the University of Minnesota. “Because that’s not how we think. We think in round numbers.”

So even if people came across a price of $3.99, they would still perceive that price as being in the $3 range, Rao said.

How do consumers change their behavior?

The last time gas prices breached the $4 barrier was back in 2008, when they hit the then-all-time high of $4.11.  In 2011, researchers conducted a study looking at how rising prices between 2006 and 2008 affected grocery shopping behavior.

When they moved from $2 to $4 a gallon, people decreased their monthly shopping trips by 20%, their monthly purchase volume by 14% and their monthly expenditures by 6%, according to Dinesh Gauri, a marketing professor at the University of Arkansas and one of the authors of the study.

Gauri said people also increased their visits to supercenters and warehouse clubs — stores that enable consumers to buy the products they need in one location without making multiple trips.

In 2022, Gauri said, we’re dealing with rising inflation and sky-high housing prices, which means consumers are likely to cut back on spending.

One thing people may also do is wait in line at Costco for gas, said University of Michigan marketing professor Scott Rick.

“They’ll discount the value of their time and not realize the cost of that,” he said.

But while people may take fewer trips, they may not alter fundamental parts of their lives, like where they live or the type of car they drive, according to Rick.

Some people have indicated an interest in switching to electric vehicles because of gas prices, but the cost of these vehicles is still too high and the supply low. For people to make a mass transition to EVs, these cars have to become easier to buy, Rick said.

Why people are sensitive to changes in gas prices

Rick said paying for gas is unlike other transactions, like a monthly subscription set on auto-pay, which it’s easy to lose sight of, or a fancy dinner — a waiter takes your card and takes care of the purchase.

“With gas, you’re just there and watching this thing climb and climb,” he said. “You can see every penny being extracted from you in real time.”

Rick said people set up specific “mental accounts” for the items they purchase. In mental accounting, people essentially earmark money for specific purposes, like buying gasoline, instead of treating it interchangeably.

“It can be hard to move money across mental accounts. So that’s why we feel the pinch,” he said.

He pointed out that when gas prices fall, some people will buy premium gas because they have more money in their gas budget.

“It’s fascinating psychology on both sides, when there’s sudden increases or decreases,” he said.

Rao of the University of Minnesota said it’s important to put the infamous figure of $4 in context, to realize that people pay attention to trends, not just absolute numbers.